Sleigh Bells Ringing, Just hear those sleigh bells
ringing and jing ting tingaling too
Come on its lovely weather for
a sleigh ride together with you – Neil Diamond

We put the Christmas tree up this week, I wasn’t going to I know but looking at it every day sat out in the cold looking sorry for itself all wrapped up. Everyone else seemed to be putting their’s up and it only has to survive a couple of days without me topping up the water. Worst case scenario? The husband has to take it outside and saw an inch or two off the bottom again. Because I’m not doing it, having done it by myself while I was feeling all high and mighty during the start of the week I’ve decided that using a saw while simple involves quite a lot of physical effort and it’s definitely not for me! I did it though and I dragged it’s sorry self all the way up into the living room. Put it in it’s stand, unwrapped it, threaded all the lights myself and then decorated it. Where was little Ariella during this? She was napping, pretty good use of time in my view. My back does not agree but that’s an ongoing debate between me and it. 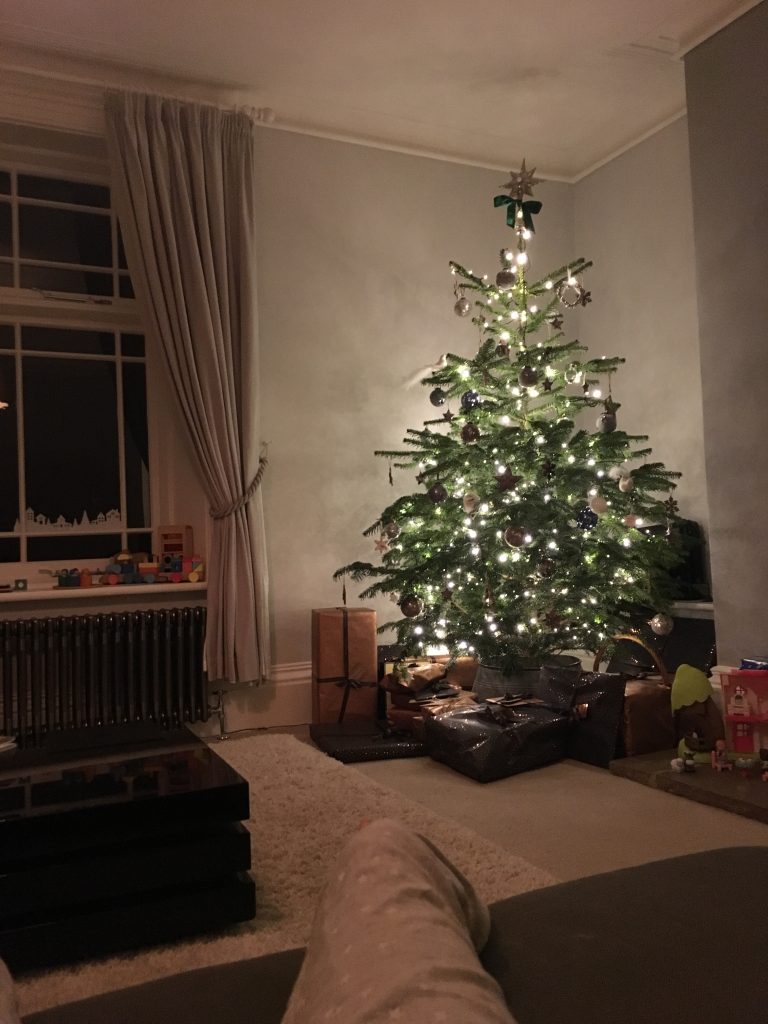 If you don’t have a Christmas tree stand for your real tree yet I really do recommend you spend a little more than you might normally and buy a Krinner. You can put the tree up by yourself as it has a little foot pedal and a great big water storage area.

In other news, we’ve ditched the bottle (hooray)! Ariella has slept through the whole night for quite a while but when we tried to remove the bed time bottle she was waking up in the middle of the night for milk. She definitely wasn’t waking due to hunger at this age and she didn’t really want the milk after all she wouldn’t drink it in a beaker cup. We decided to just go cold turkey, we explained to her that she was a big girl now and big girls don’t drink milk in a bottle. The first night was predictably dramatic, she had full blown tantrums, threw her arms around, threw her head back, screamed, cried, could not be comforted. We kept going in to reassure her and eventually she wore herself out when her efforts did not bring us running to her room with bottle in hand.

The second night, it was like a switch had flicked and she no longer woke for milk. Just a little whimper then soothed herself back to sleep. Third night in she didn’t wake at all, I did go have to go in and put the blankets over her again as she really loves to move around at night. But other than that she was totally asleep, I had no idea we would only be in for one night of tantrums. It feels really too good to be true!

We had our first hydrotherapy session on Wednesday and I had no idea what to expect, although Ariella did attend swimming lessons for many months I had never taken her myself. I also wasn’t sure exactly how hydrotherapy would be different to normal swimming, but from what I can tell the pool is warmer but so far most of the swimming exercises are on par with the likes of Waterbabies. Naturally the amount of children attending is a much smaller group, just three but this gave the two therapists plenty of one to one time to help out with the exercises. Ariella really enjoyed herself and spent most of the time laughing, It reminded me to book up some regular swim classes again as she really does enjoy the water (we stopped when we moved). One big difference as I said was the temperature which is comparable to being in a hot tub, so rather warm! Ariella has never liked a cold pool so this was perfect for her, for me I can’t say It bothered me too much but I do tend to have quite a good tolerance for warm water.

At our last physiotherapist session Ariella was given some orthopaedic footwear (Piedro) to aid her recently diagnosed hyper mobility, hyper mobility is in basic terms over flexible joints. We decided this week to put them on her routinely, so she now wears them from waking until bed time and this has really improved her walking hugely. I’ll definitely be looking at the Piedro brand for her next pair of shoes, they also do sandals so I’ll look to add those to our holiday list. The pricing of the footwear is greatly inflated but the extra support really helps gain confidence in the basic structure of the foot. Even when we take the boots off now she seems much more stable, so I’m sure the specifically designed footwear is having a large impact. 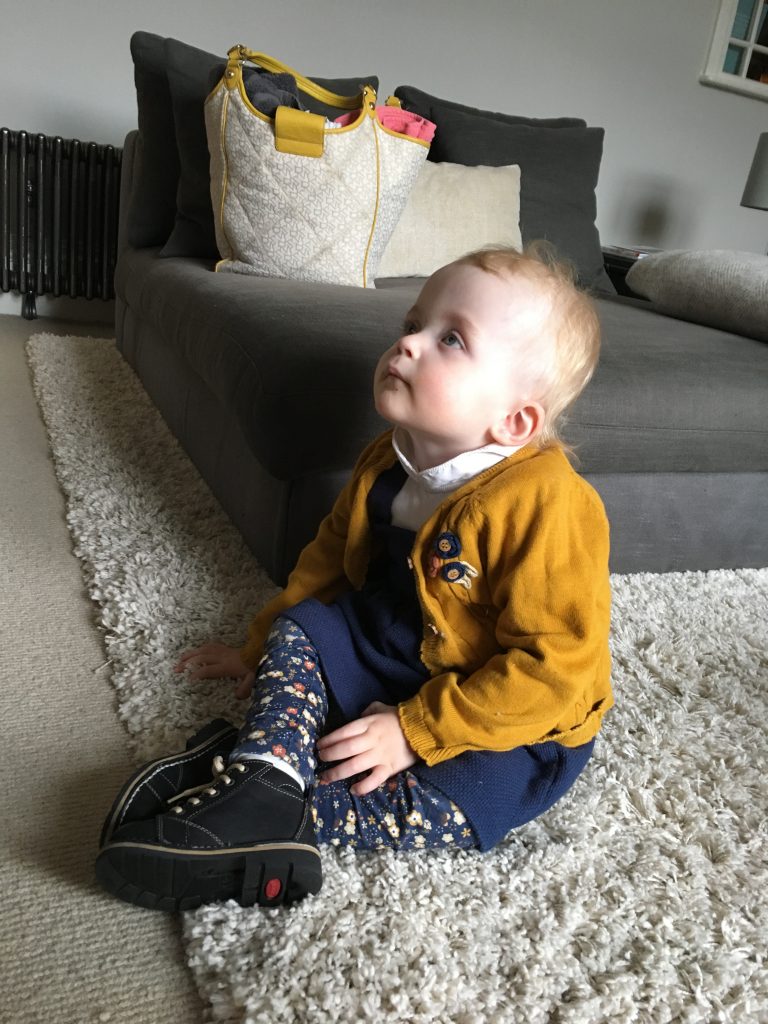 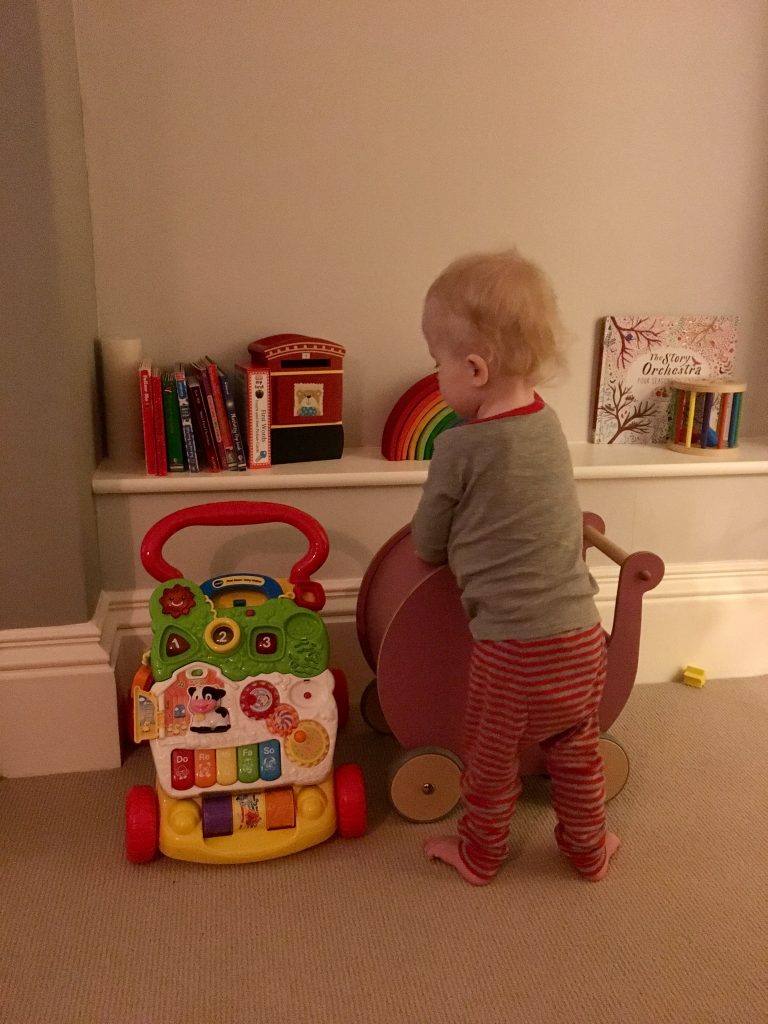 This week has been a real run up to festivities for us, we had plans to attend a glitzy red carpet affair on the weekend and then continued that with a long weekend spa break. Both were exceptionally well timed, fun, relaxing and I think Ariella enjoyed spending a few days with her grandparents who offered up their babysitting service for the red carpet affair before heading into the Cotswolds. We greeted them at the door with a vomit soaked toddler, vomit covered mum and the external pieces of the car seat in hand. Everything was sponged down or washed, just in time for her second go hours later at which point we decided she was either car sick or unwell. As days past it was clear she had some kind of vomit bug given the car seat was covered once more (and currently sitting in the washing machine for a good deep clean). 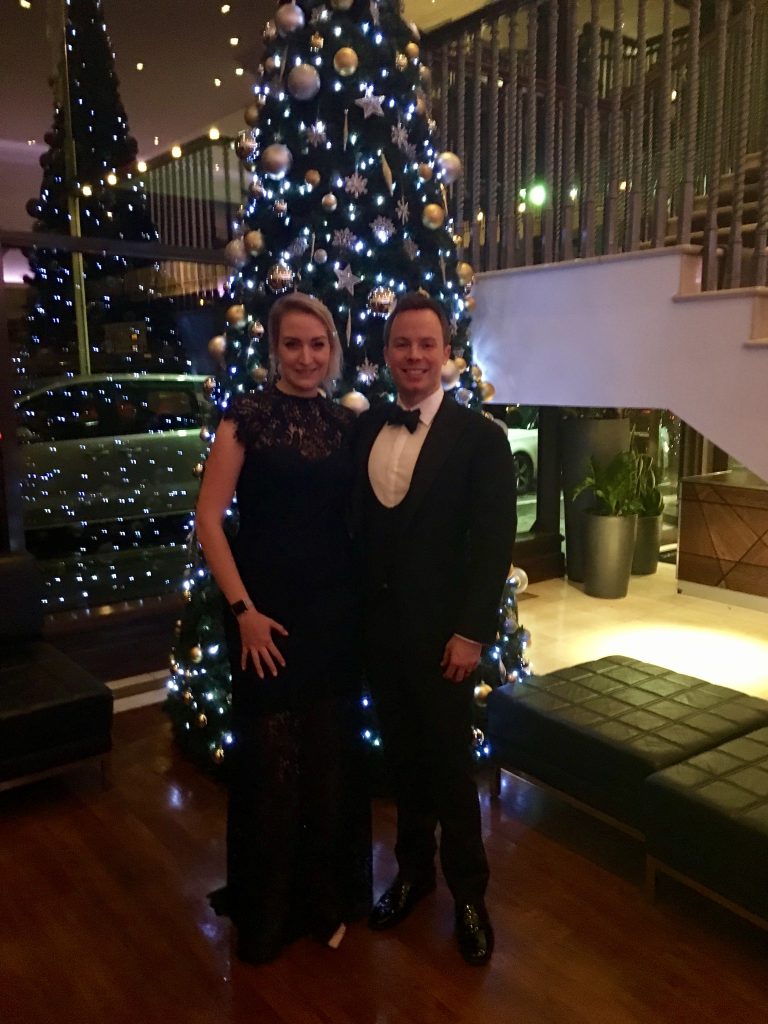 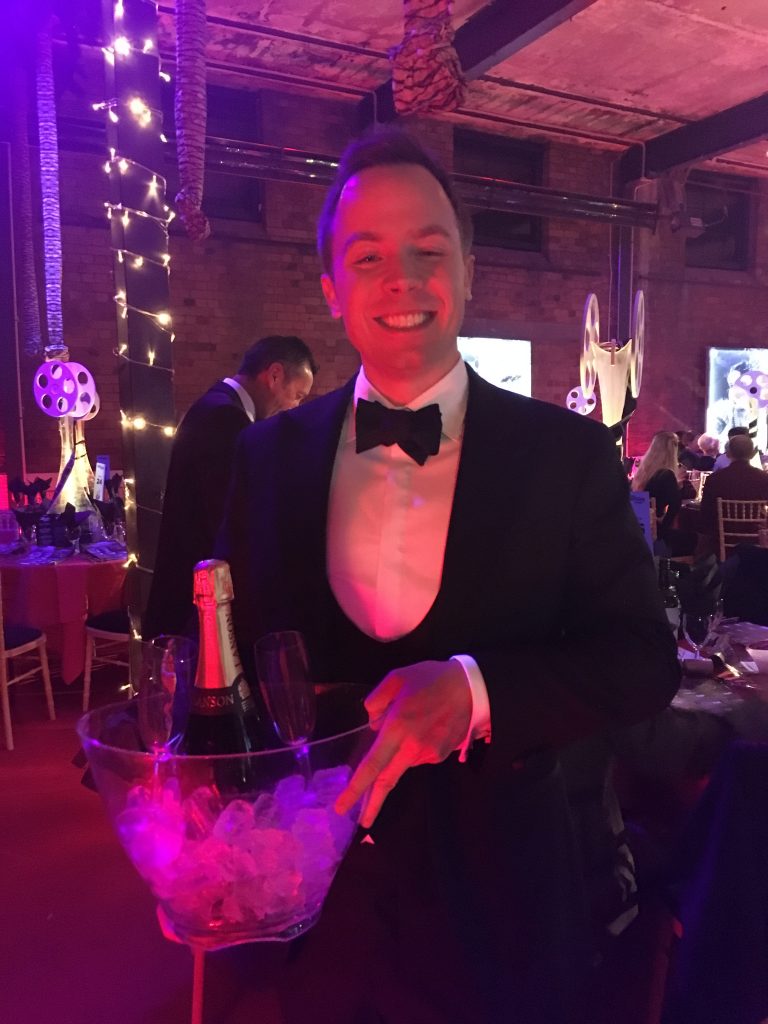 Next in line was Calcot Manor & Spa in the Cotswolds, one of our favourite places to relax. They have an onsite creche which you can use included in the room rate when staying in the family rooms alongside the baby listening services. The Creche is such good fun, the staff are always very reassuring and all lovely. As well as this they have the most awesome spa with a blissful outdoor hot tub and top of the line treatments. We used to visit often before children and it’s remained consistently excellent throughout the years with a unique balance between catering for the couple market and also families. This is such difficult line to walk on! The food is top quality, the spa excellent, the family rooms lack nothing – they are as comfortable and accommodating as our own home. Perfect! 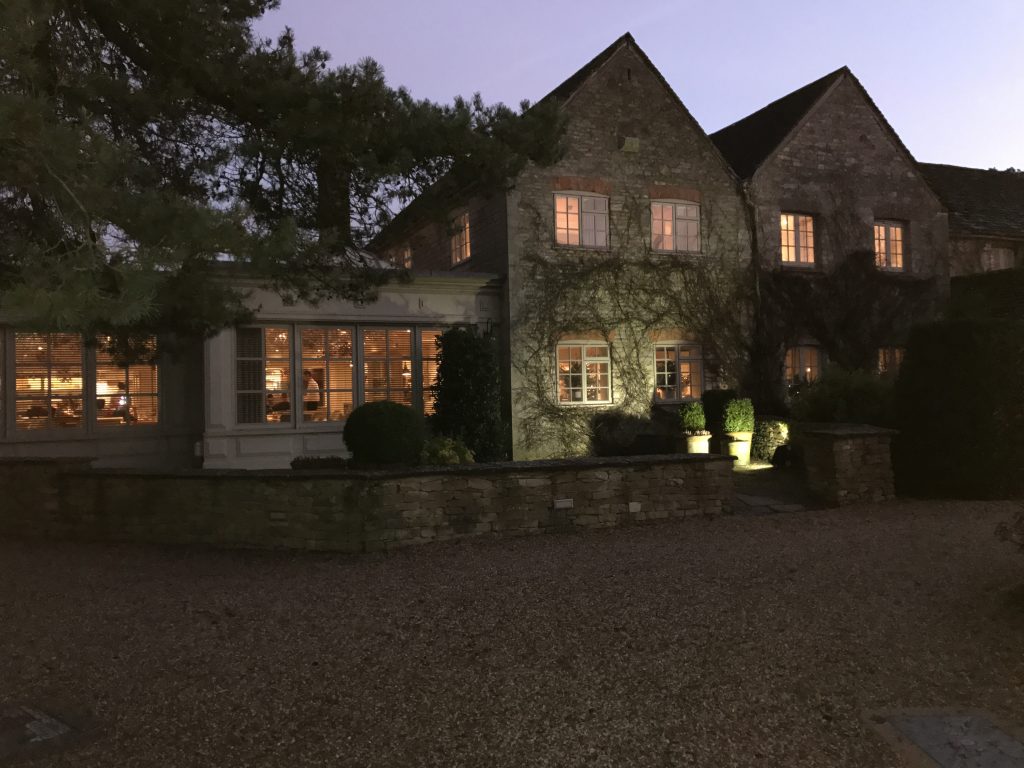 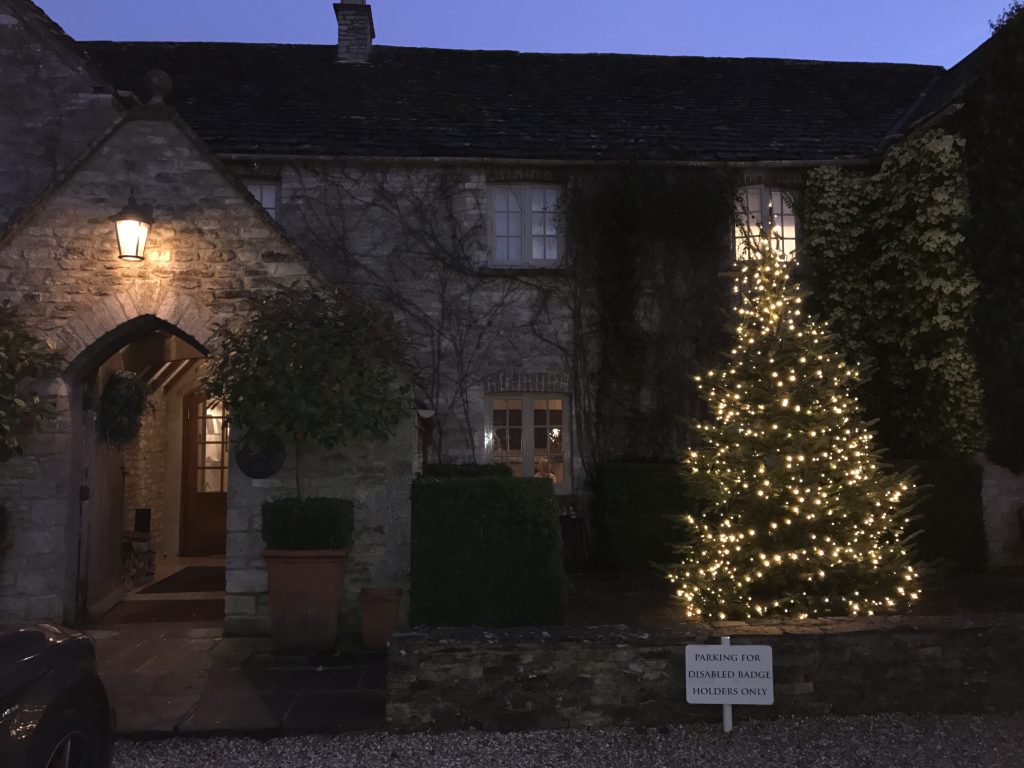 On this occasion we decided to go for a family suite as Ariella tends to get disturbed now when we come in and out of rooms. It’s not always an option but she did sleep a full 12 hours as normal here, the rooms are beautiful whether you have older children or younger. They are accommodated with tv’s, games, books and also the younger children have all the extras you might usually need to bring (steriliser, washing up liquid, nappy bin). 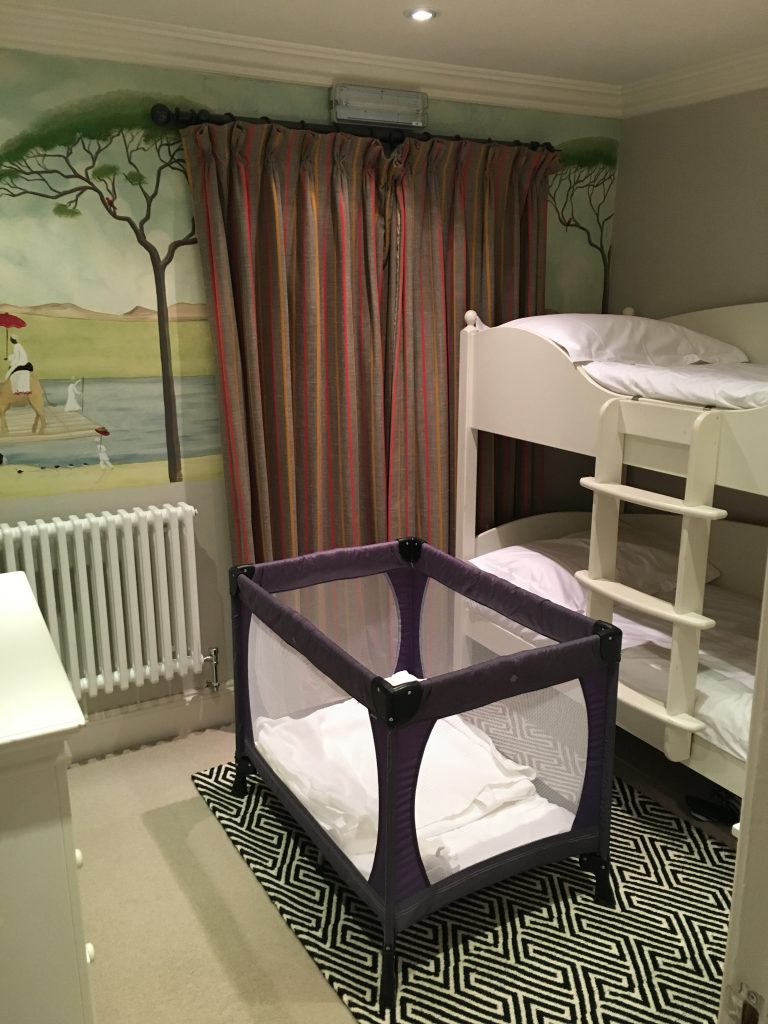 The first evening we dine with Ariella at the children’s high tea then once she was asleep enjoyed some superb cocktails in the beautiful decorated lounge area with some of our close friends, with roaring fires and Christmas trees scattered throughout it was very relaxing. Just what we needed to unwind and prepare for the rest of our stay (as well as the treatments had scheduled at the spa). The following day we made use of the creche, dropped Ariella off and headed to the spa where we enjoyed spectacular massages – I opted for my usual hot stone but a much longer duration this time. We managed to change or creche booking to a little earlier so that we could enjoy the spa and the hot tub before our treatments, as we weren’t sure if we wanted to take Ariella swimming. The swimming times for children is quite a narrow window but as it turned out, Ariella wasn’t feeling very well anyway. 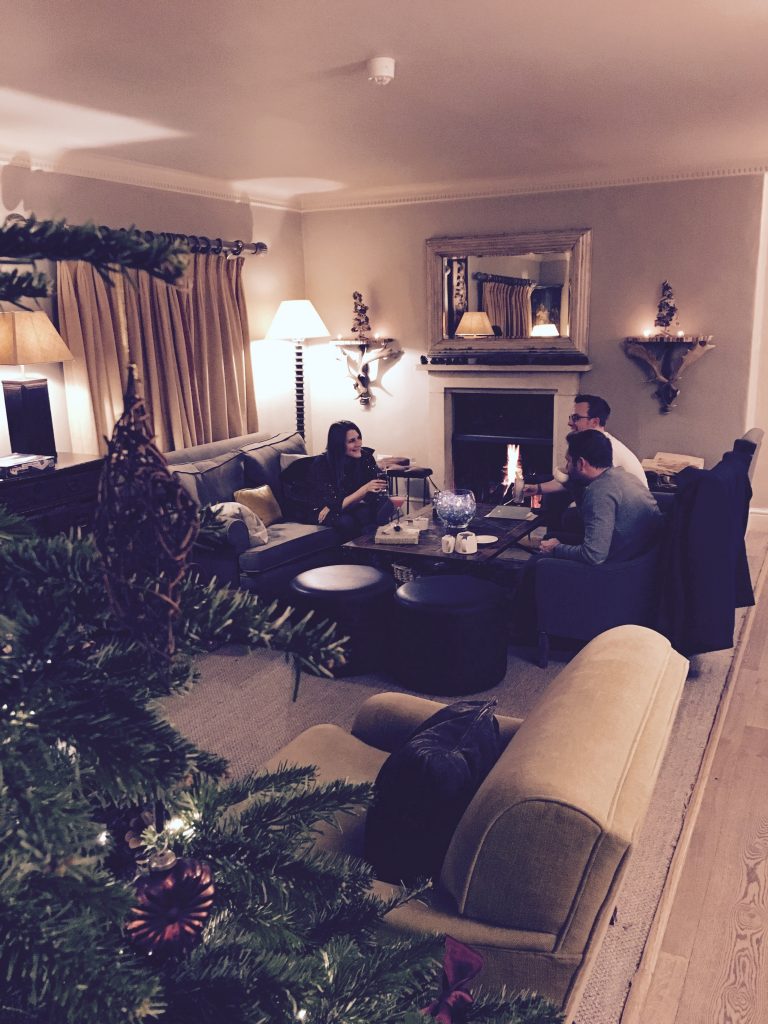 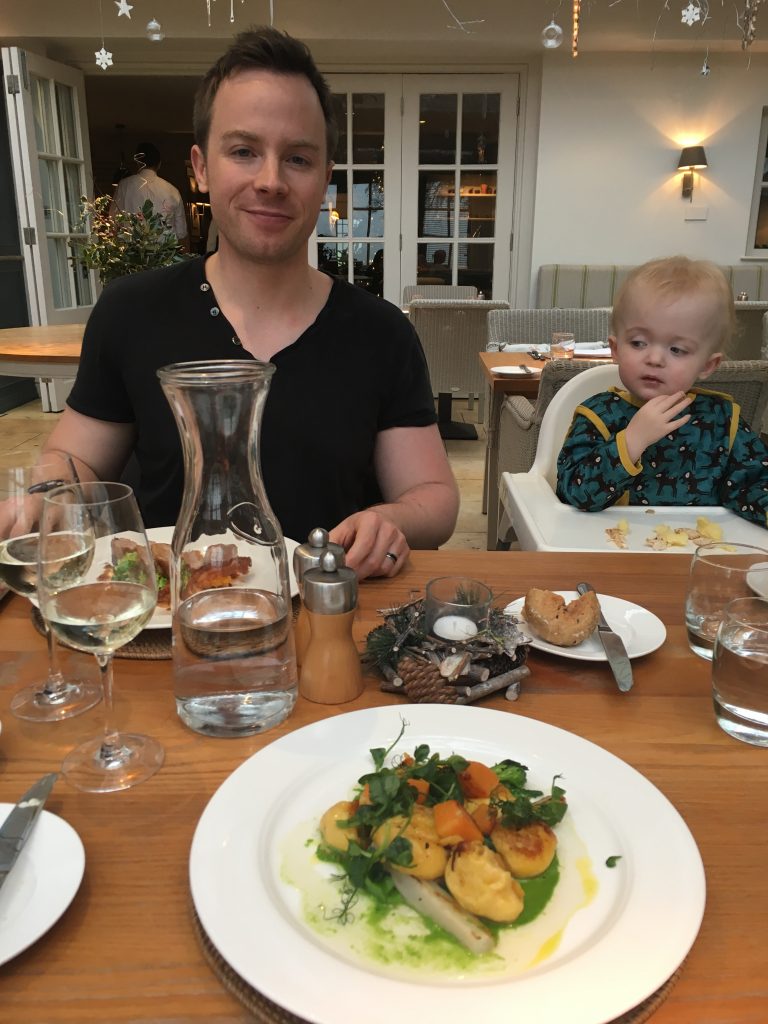 Yummy lunch in the conservatory restaurant

The following evening we had a baby sitter booked in, the creche at Calcot offer baby sitting in the evenings which is really a treat. So that left us free to dine with more friends in the fine dining Conservatory, exceptional food and wine is on offer. It was so great to have a huge amount of time to ourselves, child free and I feel very much ready for Christmas now! 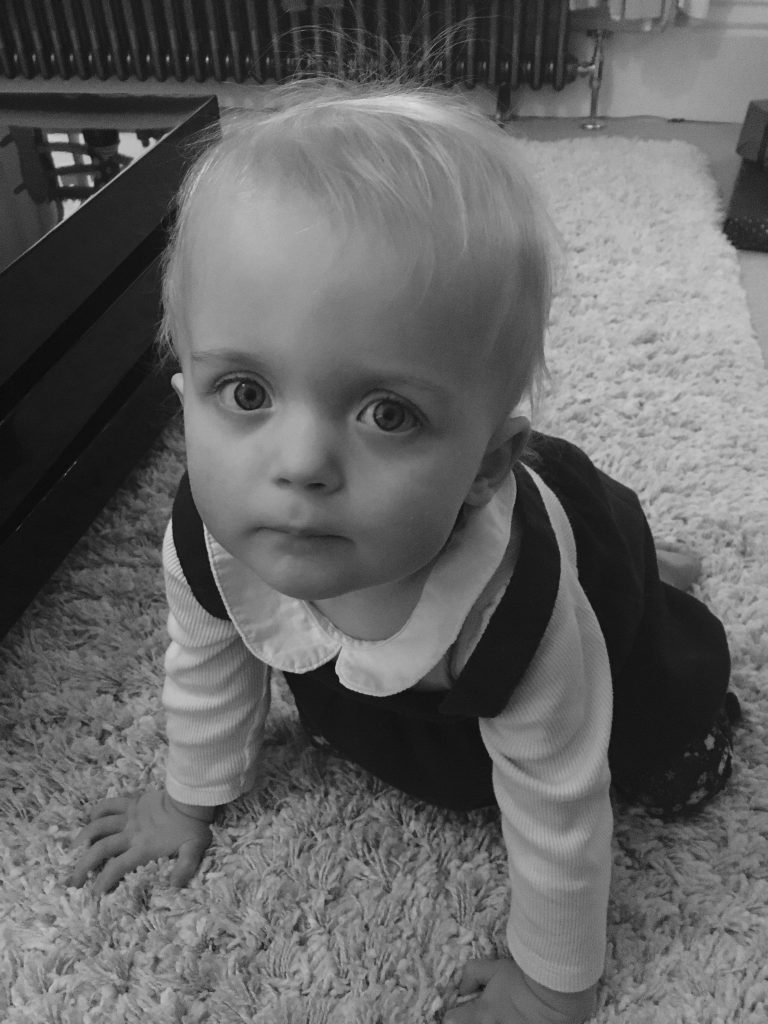