Picking a carseat is no mean feat, there are so many to choose from and every parent just wants the safest seat they can afford. When trying to decide many parents go to trusted comparison websites like Which? and look at safety test scores that are conducted against the seats. You may have even heard of the new phrase i-Size which is a new standard of seat that some of the latest car seats are advertising, you can find out about the i-Size standard here in more depth. Recent testing and research has found that using the new extended rearward facing (ERF) car seats (keeping them rear facing for much longer) is five times safer in an accident than a forward facing car seat. This is due to the fact that frontal collisions are the most dangerous collisions you can have in a car, they come hand in hand with the two deadly variables high speed and strong force. As you can imagine if a child is facing rearward in a frontal collision then they are not flung forward but instead cupped and supported inside the carseat. This is why the statistically outcome is some much more favourable. 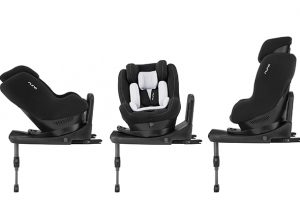 Many of my parenting friends like us have forked out large sums – £395 to be precise on the latest ERF car seat which is why it came as quite a shock when Nuna’s Rebl i-Size car seat came out with a fail in the ADAC test. Shockingly Nuna claim that the carseat is safe as it still passes the European safety standard tests (ECE R129) but these tests only reach speeds of 30mph. In the The German Automobile Club (ADAC) test which you can see in the video the base sheered right off the seat, subsequently Which? have now downgraded the Nuna Rebl carseat to their “Don’t buy” list. Nuna announced a statement on their Facebook page claiming that the ADAC test was “extreme” and not recognised as a standard in the UK, personally I’d rather car seats were tested more extremely than not.

The Nuna Rebl i-Size scored so badly in our front-impact crash tests when tested rearward facing with a crash test dummy representing a three-year-old, that its score was downgraded overall, making it a Don’t Buy. – Which.co.uk

Many of the parents I know who bought this car seat have struggled to gain any answers from their retailers about refunds with some varying replies ranging from no refunds, discuss it with your retailer to yes we will refund you. Nuna’s initial post in response to the Which? announcement on the 26th of October

At Nuna, we strive to continuously provide the best, safest gear possible for your customers and their families. That is why we designed our award-winning REBL i-size car seat to both meet and exceed the ECE R129 standard as tested by the VCA (the UK executive agency of the Department of Transportation and leading certification body).

We were disappointed to hear that recently a German automobile club, ADAC, gave the REBL a less than favourable rating when they performed their own tests on it, which fall outside of the government mandated guidelines for i-size child car seats. These results were reported in the UK by Which? Rest assured, our REBL has always and continues to be a safe and secure riding solution as it not only meets but exceeds the i-size standard, as demonstrated in the matrix below.

However, we understand that in some cases, ADAC’s rating may play a factor in a family’s car seat choice. Should you have any questions about the REBL please do not hesitate to reach out to our customer service team Monday through Friday on 0800 9520 061 between the hours of 9am to 5pm or email us directly at infouk@nuna.eu and we can discuss all with you. – Nuna Facebook

No talk of any kind of refund which corresponded with the many parents I’ve heard from. The results of the german test had lots of parents in a panic who have now gone out immediately to replace their car seats before other competitors run out of stock. On the 28th of October Nuna clarified further “We will not be conducting a product recall unless the recognised relevant national authorities deem the seat is unsafe.” It appears pressure from customers however has given the team at Nuna a change of heart, as today they posted the following statement on their Facebook Page.

Your peace of mind is important to us and should you need immediate assistance, we recommend you reach out to your retailer. We are partnering with their teams to help you with next steps, including the option to replace or refund so that each of you can best be assisted. – Nuna, Facebook

Luckily we didn’t buy the Nuna Rebl and opted for the Cybex Sirona (which I shall review here in the near future) instead, but if you’ve had trouble getting a refund yourself I’d love to hear about it! You can contact Nuna’s customer service team on 0800 952 0061 or email them at infouk@nuna.eu .

The Shock of the Fall

Technology, evolution or the downfall of human social interaction?