If you ever intend to bottle feed, buy it. Buy it now. Sell whatever possessions you need to sell to buy it. 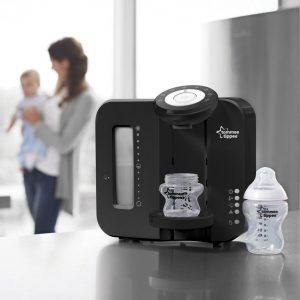 I love this machine, love it. The only other thing that comes close to it is ready made formula. How ever my little beast has anti reflux stuff which for whatever reason the baby formula companies don’t make pre made. Listen up large corporations, the amount of babies who have reflux you need to get on with it!

Anyway the Tommee Tippee perfect prep machine comes with us wherever we go. I got caught out with a little hospital stay and had to actually boil water and wait for it to cool down. I think if I had to do that every feed I would have stuck with breast feeding!

Seriously it’s so easy to use, you pop the powder in the bottle press a button. The machine dispenses a hot shot which you shake (with lid) and it kills any bacteria in the formula. Pop the bottle back under, press the button, shake and it’s ready to drink.

There is a filter which filters out the bad bits in the water, it’s not very expensive to replace and the machine pops up to let you know when it’s near the end of life.

This machine is just amazing, the only downside I would say is that it only goes down to four ounch feeds. When you have a newborn there’s a bit of wastage as they can’t drink four. But Tommee Tippee say that’s the smallest they can manage and still get enough hot water for the powder but cool water to make it drinkable straight away.

It’s not long before they are drinking four ounces so no big deal (although you might hear differently from my husband who was bankrolling all that powder feed). If I could have been bothered I would have run the kettle but that in the middle of the night? No I don’t think so.

All in it takes about two minutes to make a feed which feels like a long time when baby is screaming hungry.

The machine itself looks nice on the countertop, we opted for the Amazon exclusive black version. It’s light and has a cable tidy on the back for transporting it. It’s adjustable depending on the size of your bottles, easily by adjusting the bottle stand level.

I would say it’s one of the most used, best purchases we made for our daughter. If you are interested then often deals are on and you can get the machine greatly reduced in price.

We always take it with us when we travel, if we could use ready made we probably wouldn’t but that’s just how it is for us.

100% worth it’s weight in gold and I couldn’t recommended it more.