It’s been a little while hasn’t it? I’ve been writing things slowly, drafting posts since we came back from our holiday but it feels like we stepped right into plans for Ariella’s birthday party. I sent the invites out ahead of time before we went away, thank goodness! But even with that we had plenty to organise, make and do. The invites were bear themed, from an Etsy store (JenTbydesign) and so we took this and ran with it – following with a Woodland theme for her second birthday party.

I found the design for these simple birch trees on Pinterest, I used IKEA paper and some water paints. It was really therapeutic to make them during nap time, I do enjoy painting and I had forgotten how much fun it can be. Plus you can use up the rest of the IKEA paper on a roll for other crafts or else attach it to an easel for drawing on. 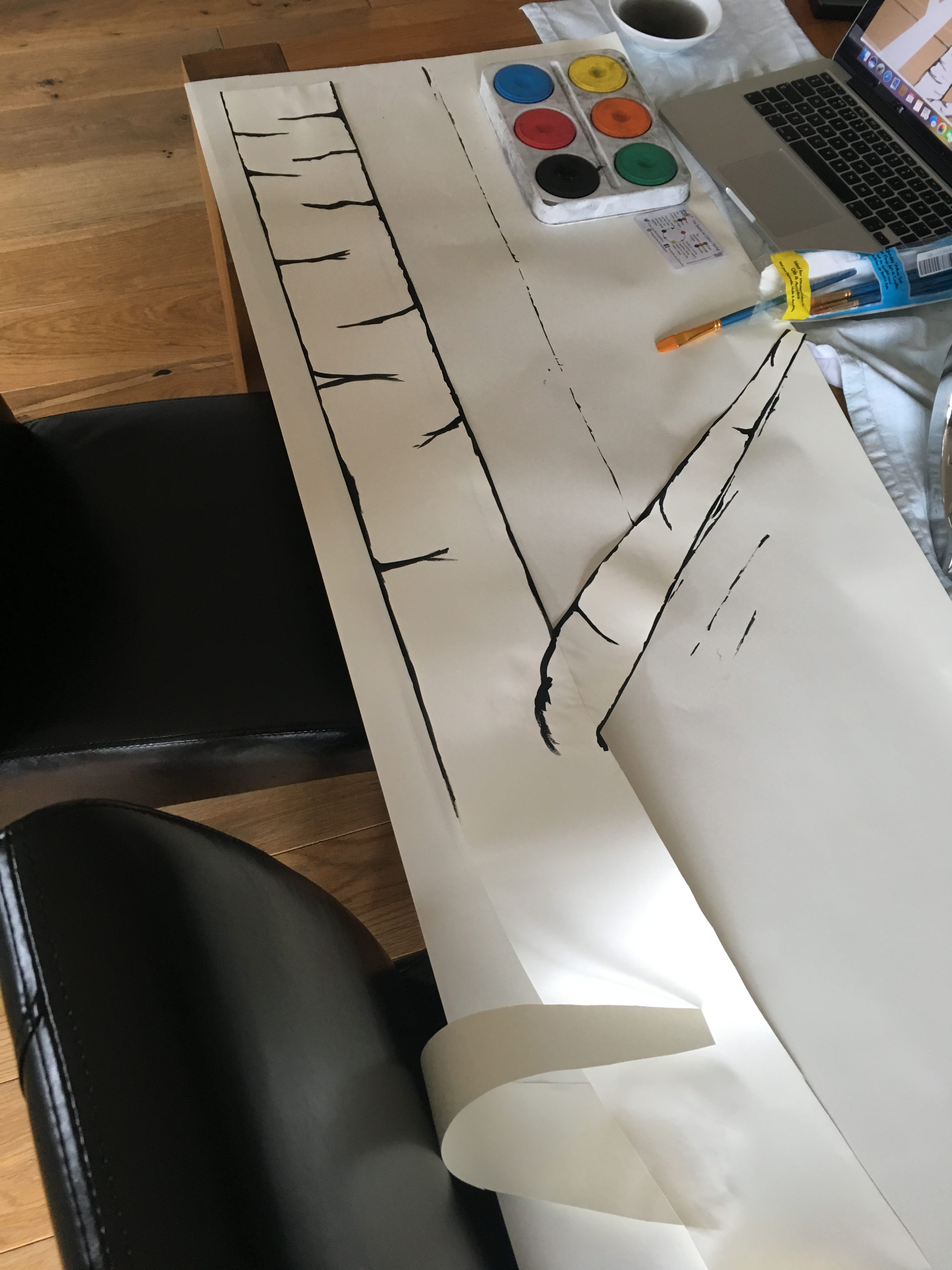 Birch trees made out of paper

Also I ordered a set of woodland printable party decorations from another Etsy store (Kudzumonster) and printed them at home onto card. You’ll see quite a lot of things purchased from Etsy, it’s my favourite place to order custom items and I find the pricing much more reasonable than Notonthehighstreet. One of the birthday banners

Much like Ariella’s 1st birthday party I wanted to incorporate some paper decorations again, this time I had a custom order made on an Etsy store (DECOPOMPOMS). In hindsight I could have made these myself but they were made perfectly and it would have taken me a lot of time. I love the colours and variety of sizes, the honeycomb decorations were particularly lovely dotted around the ceiling. I attached them using some 3M Command ceiling hooks in the understanding that they come off without leaving a mark (I’ll let you know!). EDIT: Yes they came off, one snapped and left a mark which I’ll have to paint over but the rest came on great.

Setting up the pompoms!

An hour before the party!

We had a few children coming to the party and I wanted to make sure there were a few activities for the children to do. We started with planting sunflower seeds, tagging them with the children’s names and wrapping them to take home. I hope they grow but we will see! I also picked up some woodland animals for them to paint too from Hobbycraft and we had a big woodland colouring wall for the children to decorate. 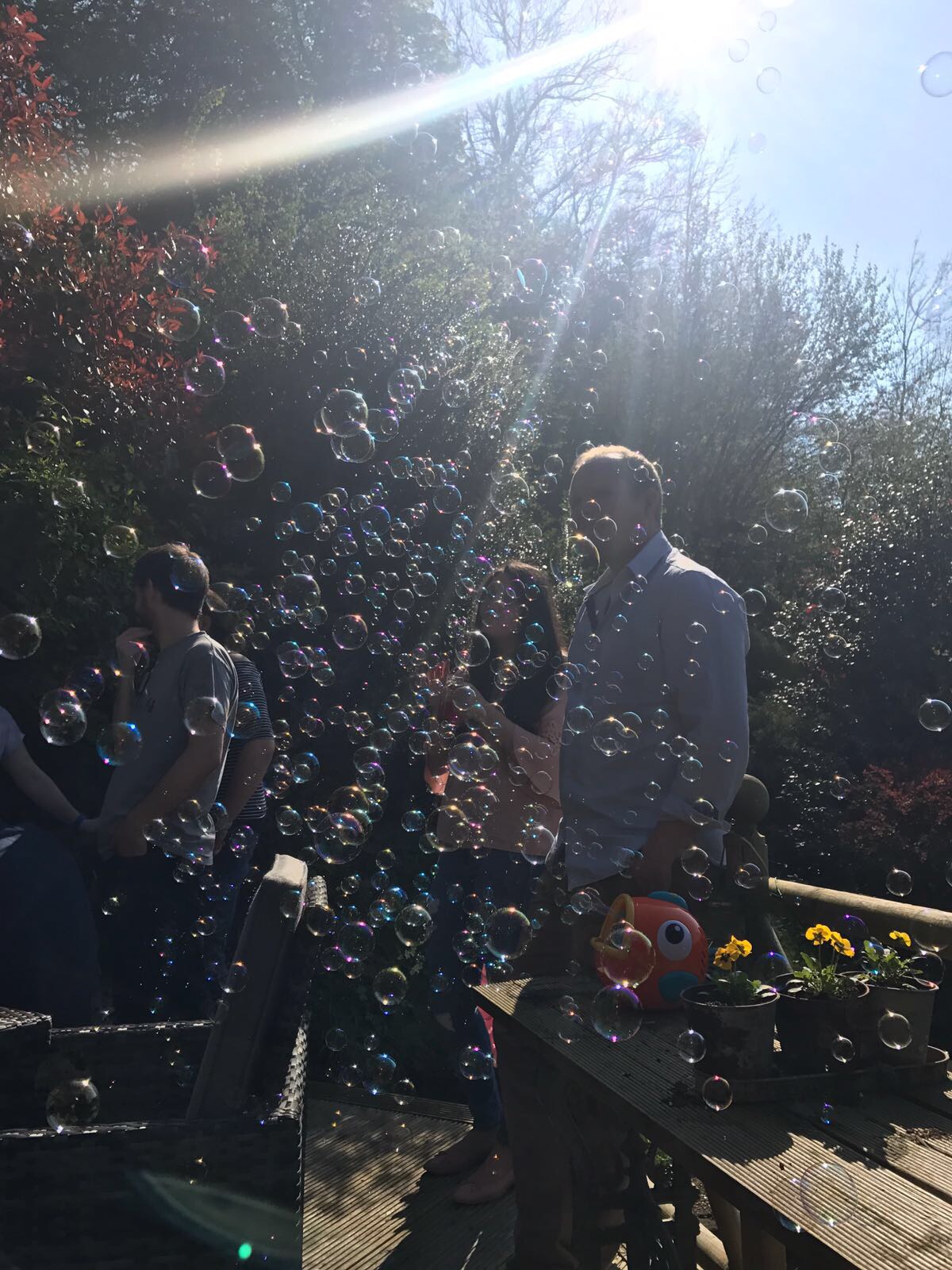 A fabulous sunny day, Frankie the bubble fish is in full swing blowing bubbles all day long in the garden.

Giant woodland colouring poster from CaptainCookieCrafts an Etsy store. I cut it in half it was so big!

It was a brilliant party, Ariella coped marvellously and wasn’t at all upset with all the party guests around her. Previous group gatherings have resulted in her having a big meltdown, so this was amazing. The next day (her actual birthday) we opened her presents together as to not overwhelm her too much and she fell asleep half way through – as it turns out she was then sick later in the day so I think she had too much rich food! We were very lucky with the weather, it was a fabulous weekend and the warmest weekend of the year that I can remember. I really couldn’t have asked for a better day for her, she was on top form and everyone in high spirits enjoying a beautiful day evening a hyggelig during the after party once Ariella was asleep.

The next day she also started walking one-handed again which she has refused to do for a long time and she took a couple of steps alone. I just know she is working towards walking independently as she keeps testing the water by letting go briefly when standing up. We’ve had physiotherapy weekly for the last couple of weeks too which has in my view really helped (as well as the body wrap and shoes).

I love Christmas and this year now that Ariella is older I wanted to incorporate her crafting time with Christmas too. Making an ornament seemed to be the perfect solution as Ariella still does try and put certain things in her mouth. The instructions really are left for you to setup with a quick fingerprint from them, this was perfect for Ariella. Once I had made one with her I knew that these would make excellent keepsakes for the rest of the family, we soon set about making more ready for Christmas.

These ornaments are made out of polymer clay that is baked in the oven to harden then painted with acrylic.

Acquiring all the various pieces is the only downside, clay, paint, brushes, letter stamps, ribbon, permanent markers it does definitely require quite a few things. Probably best to visit a craft store or go online to find all the items. I found the Fimo clay quite hard, you need to warm it up by kneading it a lot but once that part is done then it was very easy to roll out. Ariella when we made these was still putting things in her mouth a lot, so I rolled it out and pressed the clay using the cookie cutter. Then laid it out ready for her on her table, she did her finger print heart under close supervision.

Once you’ve stamped out your child’s name using the rubber letters then it’s time to pop them in the oven, I decided to go with fifteen minutes which was perfect. The oven stinks after by the way, but it soon disperses just don’t go putting your nose near the door when you open it. Let them cool and they should be suitably solid, at which point you can then crack out the paint and brushes to start getting really creative. Something to do while they are napping as it’s not a toddler friendly painting activity. Once everything is dry then tie the ribbon in place and it’s ready to either put on your own tree or box up for gifting. I wrapped the little gems in some boxes which were wide enough but also shallow with some tissue paper inside to keep the ornament safe while in transit and tied up with a festive ribbon. I then packaged them with parcel paper and once ready posted them.

If your toddler is less likely to put the clay in their mouths they could help you knead the clay with the little roller. Alternatively you could try making them from salt dough.

You can find the instructions to make these yourself here at Cutesy Craft’s website. Autumn sun catchers, when Pinterest is your new best friend

Quite a few months into the summer I started thinking about ways to keep Ariella entertained once the weather turned. Pinterest has some super ideas for this purpose so I set about sticking a virtual pin in all my favourite ideas, ordering a huge amount of crafting material online and hoping that Ariella might not put them all in her mouth.

This Autumn sun catcher did make it to completion, she definitely put a few bits in her mouth but I would like to imagine that somewhere between learning to stick things down and me telling her repeatedly “Not food!” this little mini seasonal project played some part in her learning not to put everything in her mouth this week.

It’s a relatively simple set using contact paper, coloured cellophane, black card and twine. Most of the setup work is done by yourself, preparing the table is key – good luck trying to tape down sticky paper with a toddler in view. We encorporated a leaf per a week during our crafting/arts afternoon, meanwhile they hung in Ariella’s art display but soon enough I had plenty to string up in the window using twine and a pin (funny enough) to make the hole.

This was a good fun way of introducing Ariella to crafting and without -too- much mess.

You can find the original pin here