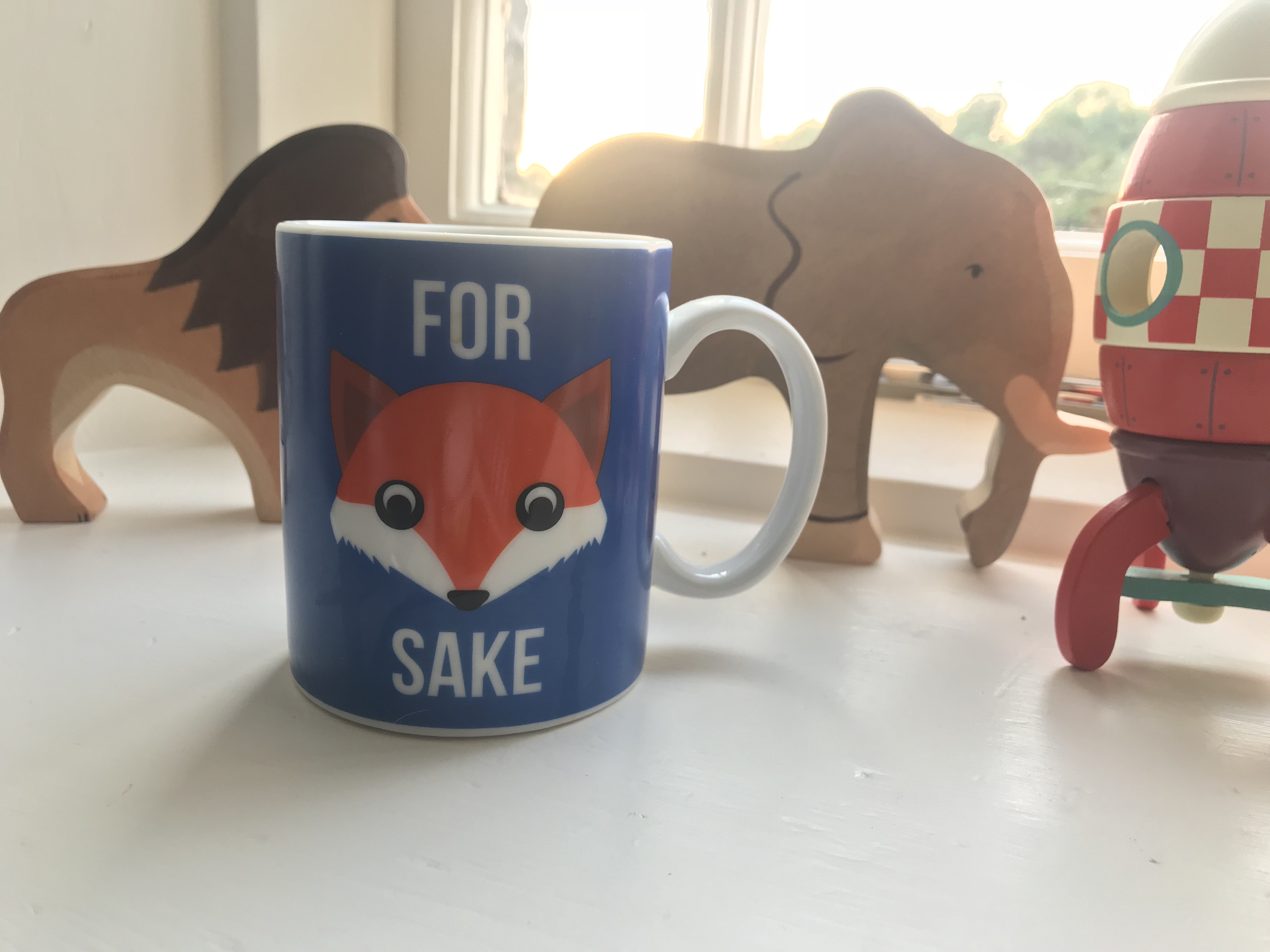 I really did think that given what occurred in January for us we all deserved a bit of a break, either I jinxed us with thoughts of easier sailing or someone really is having a laugh trying to work out what more can crop up to challenge us all. I’ll just throw it right out there, Ariella was admitted again for a bacterial infection in her blood. But it isn’t even as simple as that because the weeks leading up to this were filled with endless worry about her constant cold and the general congested and fast breathing she was making at night. I just had a feeling, call it mothers intuition that something still wasn’t right and I noticed while she was on antibiotics for an infection that made her face swell she seemed to make a lot of gains but the congestion returned after the course ran out. 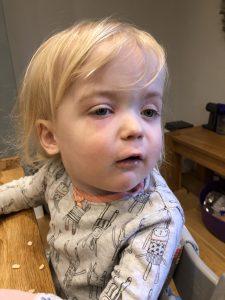 Ariella had a really bad congested nose which just stuck around pretty much after her prolonged non fever induced seizure in March. Oh wait you don’t know about that either do you? Let me rewind, yes so March – massive prolonged seizure, ambulance called forty minutes before she even started to snap out of it. It was pretty horrendous to watch, pretty terrifying too that the ambulance was given the wrong address, it felt like a long time alone and it was – but off she went to hospital and was only admitted for a couple of days, after it was seen that her bowel issue had reappeared but subsequently resolved itself again. That was March then we had May, oh May. May was the almost week-long admission, well in fact four days prior to that in and out of A&E with a suspected virus, followed by a non blanching rash, fever, pale and floppy Ariella, IV antibiotics and the icing on the cake a lumbar puncture.

Fortunately Ariella did not have meningitis, so the bacteria in her blood would be solved with a shorter course of IV antibiotics. It was a really anxious wait for the results although we knew that she was already on the treatment course, they’d started the antibiotics early on which meant it was caught early. This was really great news as I had my 30th birthday weekend planned and we didn’t want to be tethered to a hospital to top up each day and of course meningitis would be much harder to eradicate. When the blood went off to be tested we were told that it was likely to come back purely contamination and Ariella was sent home on home leave while we waited for the results, I felt really uneasy about this as I did not think she was at all well but her consultant wanted to see if she perked up outside of the hospital environment. When we arrived back for the results expecting to be discharged we were told it was actually a serious infection and that she would need the lumbar puncture to check if it had crossed over to her spinal fluid. 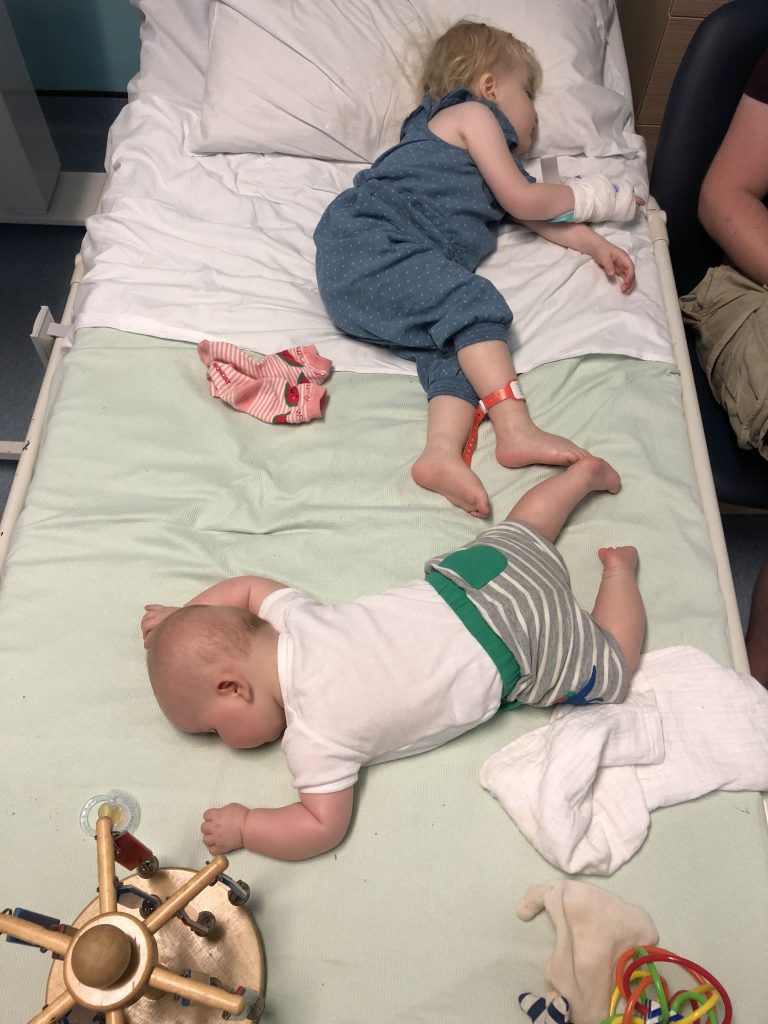 During this period of illness Ariella had two ferible convulsions, one in the waiting room of our GP. It was jarring to see the entire seizure from start to end, Ariella was cuddled into her dads arms while we waited to be seen. Suddenly her back arched and her face had a look of pain, it’s an expression I’ve never seen ever on her face before. She kicked her arms and legs out a few times as if she was striding in mid-air. Jamie laid her down in the recovery position while she seized on the floor. Although the first tonic part of the seizure is unusual and strange the clonic section is for me worse.

Her eyes fixated forward and open, her body floppy and her breathing laboured and loud. If ever I need to see an example of sucking in the chest, it always provides me one. This went on for about fifteen minutes, which feels like forever when you can see them in respiratory distress, pale and blue from the lack of oxygen. Some time later her eyes began to move, she falls unconscious. I think this lasted for some time too but by this point the doctor that came to help had called an ambulance. The GP nurse had cordoned a section of the waiting room off using big room dividers, I have no idea how or when these were erected around us. I’d given Sebastian off to a kind member of the public who had lost a blouse to the cause with his milky vomit.

“You are both so calm, so calm” the nurse kept saying over and over. I do remember thinking well we must be surrounded by doctors right now, it’s not like I’m sat with her on the floor of her room waiting for an ambulance to find our rather hidden address. Certainly distance to nearest hospital and ease of ambulance access will be on my next check list, we are at least close to a hospital. The crew arrived and assessed, It was decided given her general paleness, lack of really coming around quickly and her blueness that she needed to go to A&E. She absolutely did of course but was sent home with “viral illness” listed as the cause. The third visit to A&E was due to a facial droop, they wanted to rule out a stroke when I called 111. It turned out that the droop was probably a result of a seizure.

I think during this time you were all enjoying a nice heat wave bank holiday weekend, I dread bank holiday weekends because they mean one thing with the NHS – skeleton staff and lack of access. Every bank holiday weekend we end up in A&E lately. I hope that changes eventually and we can enjoy some time off. I spent almost a week travelling back and forth to hospital in the high heat with Sebastian sleeping on the hospital floor in his bassinet. Credit to Sebastian he was an absolute star, he slept well and didn’t seem phased by the odd routine.

I’d like to think that’s us done for this year when it comes to hospital stays, but I think I might create a quick grab bag just in case. 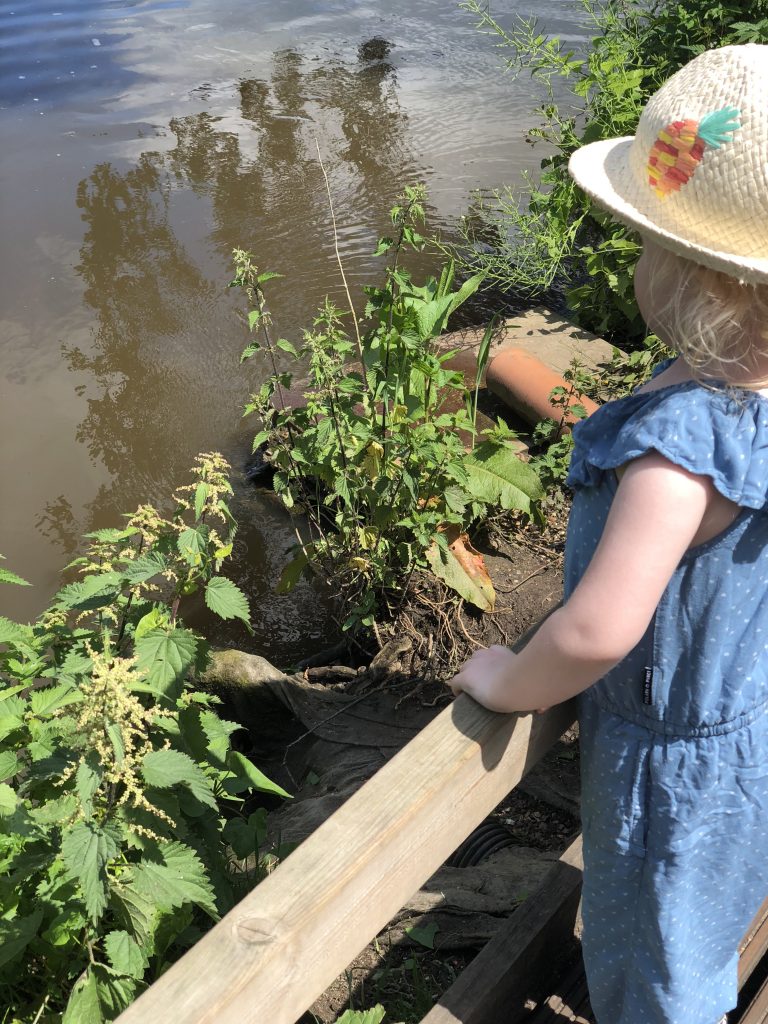