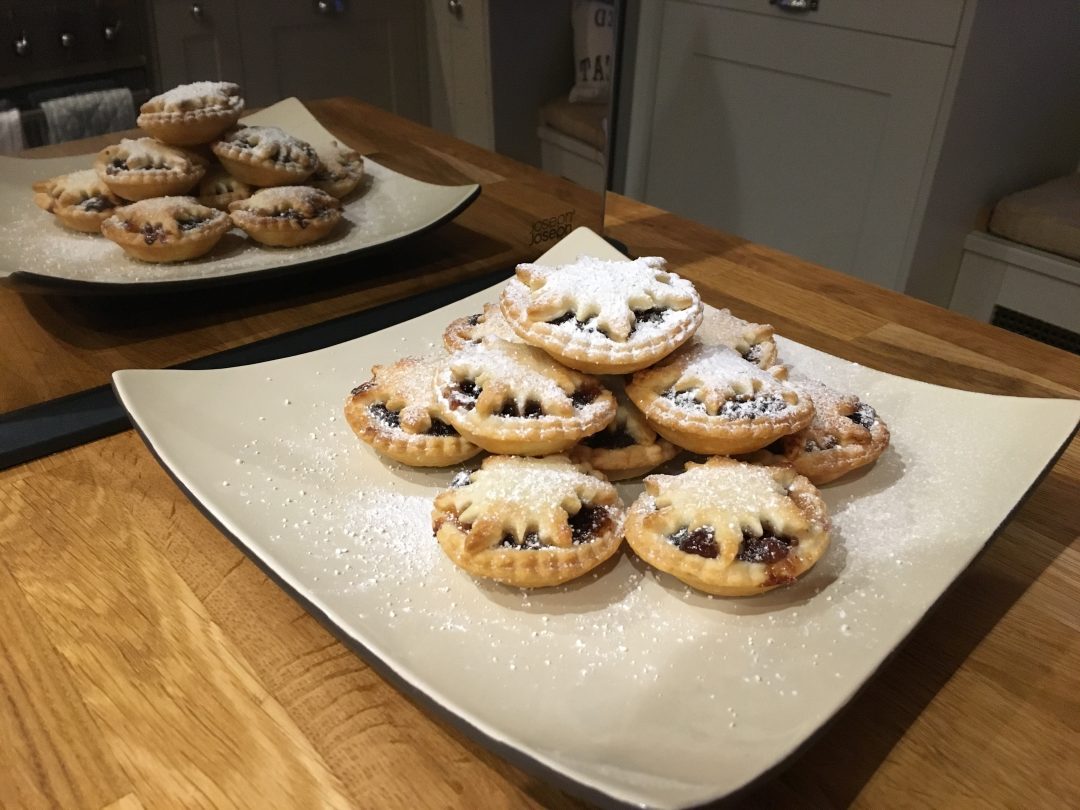 These last few days are mad, everyone running around trying to tie up loose ends before the big day. Looking for some kind of resolution in the chaos of the whirlwind so that you can just relax and chill out with family and friends on Christmas day. For that reason I decided not to book our calendar up with much during the run up, we already have Hydrotherapy (or so I thought – duh broke up for Christmas) and Physiotherapy on Thursday. This gives plenty of time to finish anything last-minute jobs and tasks, such as post parcels, write last-minute Christmas cards from unexpected sources, buy the last few presents (then subsequently be in for their delivery).

With that in mind we wandered to the park Monday (with firm instruction from any couriers to leave our packages in our preferred safe place). It was a really wet day out so Ariella wore her all in one waterproof which given the other parents were having to dig deep to find something to dry off the playground proclaiming loudly “Mummy forgot your waterproof” I think it was a good call, this normally does not happen for me! Without the fleece liner in it’s actually pretty mobile, you can easily fold it down to fit in a handbag. This is why Polarn o Pyret market it as season variable (perfect for our unpredictable weather here). 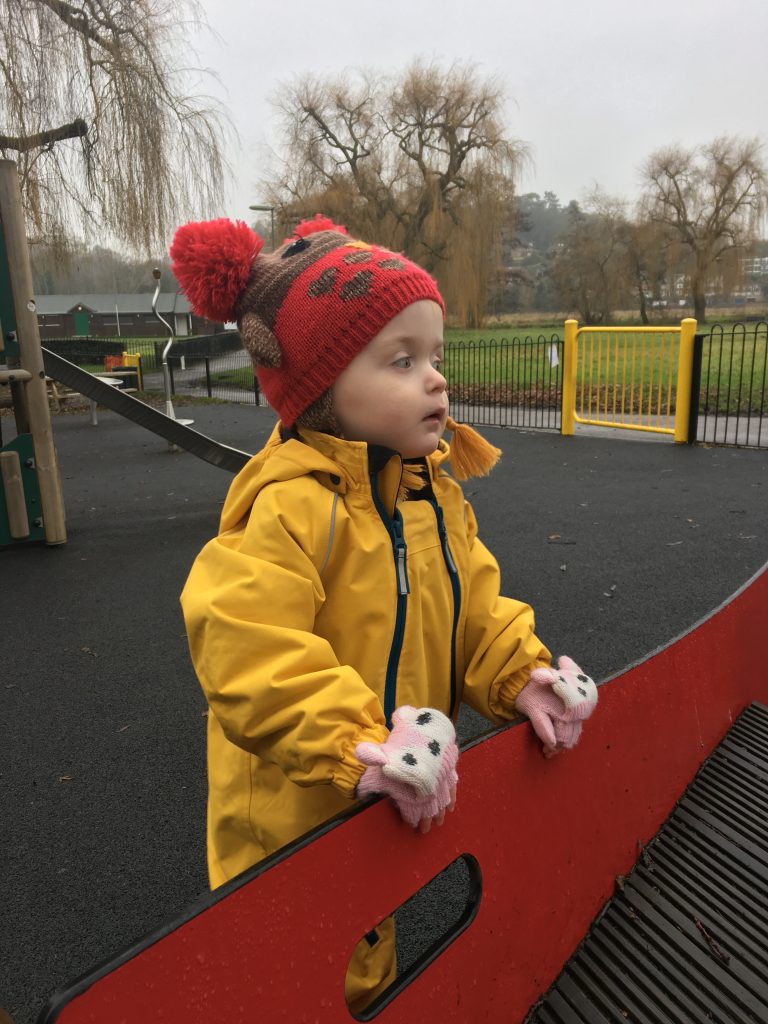 Lunch this week I wanted to try a few different recipes as I was getting quite bored with the same combinations. I found a recipe online for Lemony Fish Bites, a simple method which if you have covered things with bread crumbs before you’ll recognise. If you want to give them a try yourself I’ve linked the recipe above, Ariella liked them. I think they were surprisingly easy to do as the Cod I purchased had the bone removed and also the skin had been removed already. This meant that really it was just a matter of dipping in each bowl and then frying. I’m sure you could bake them if you preferred rather than frying. 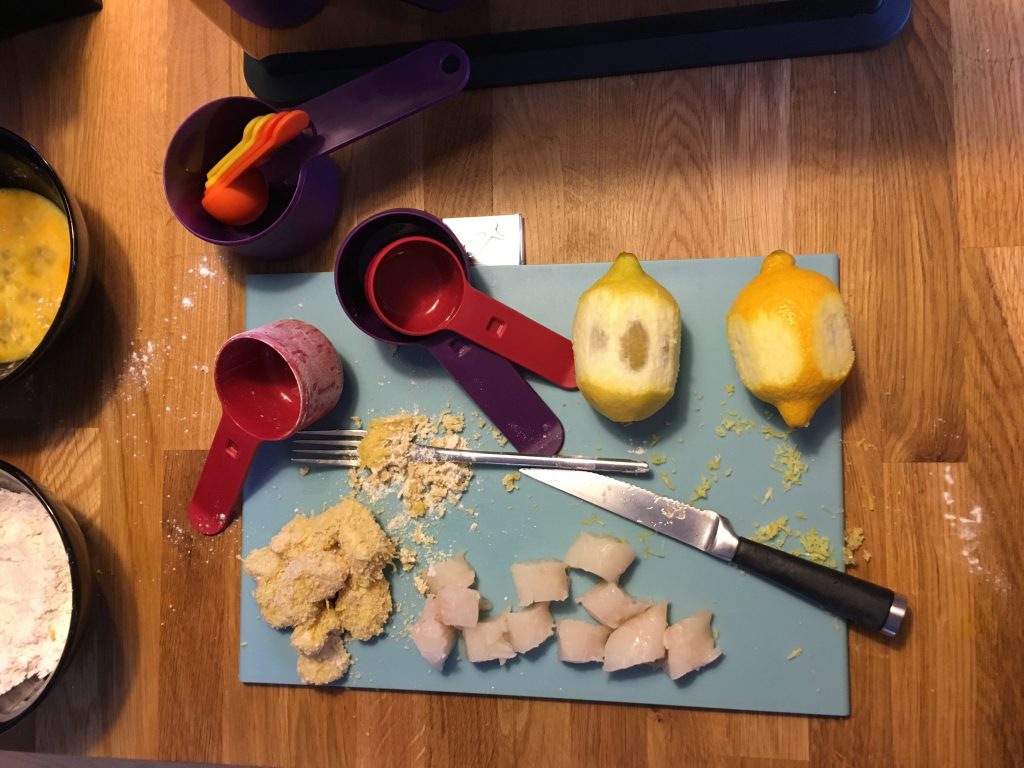 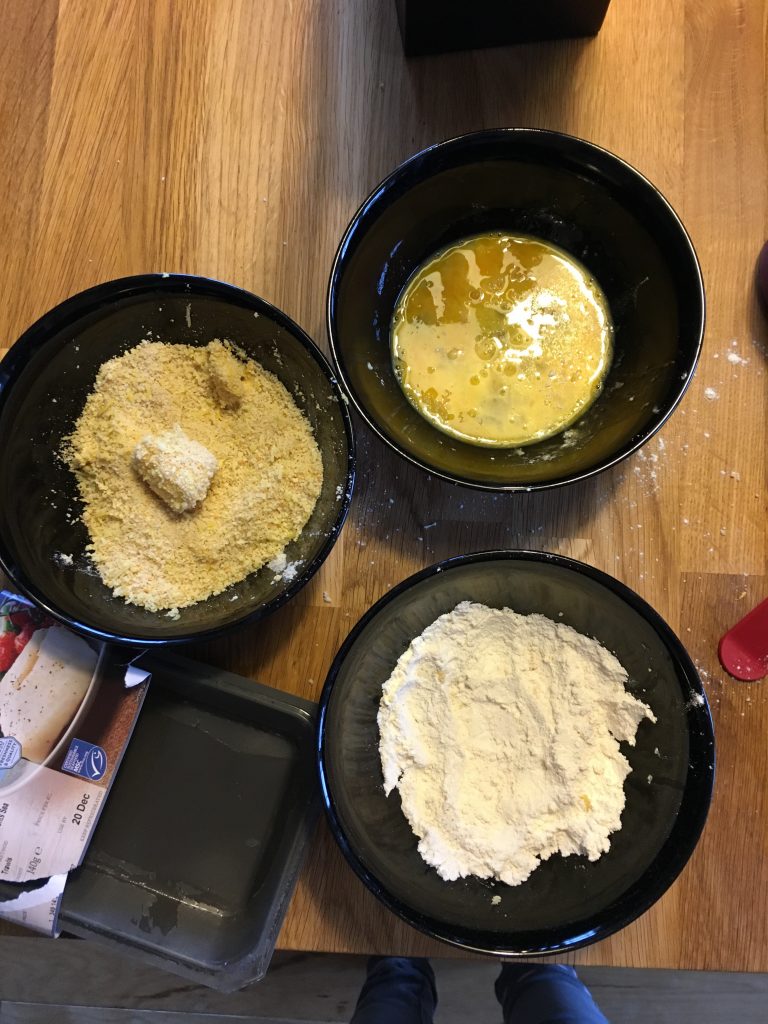 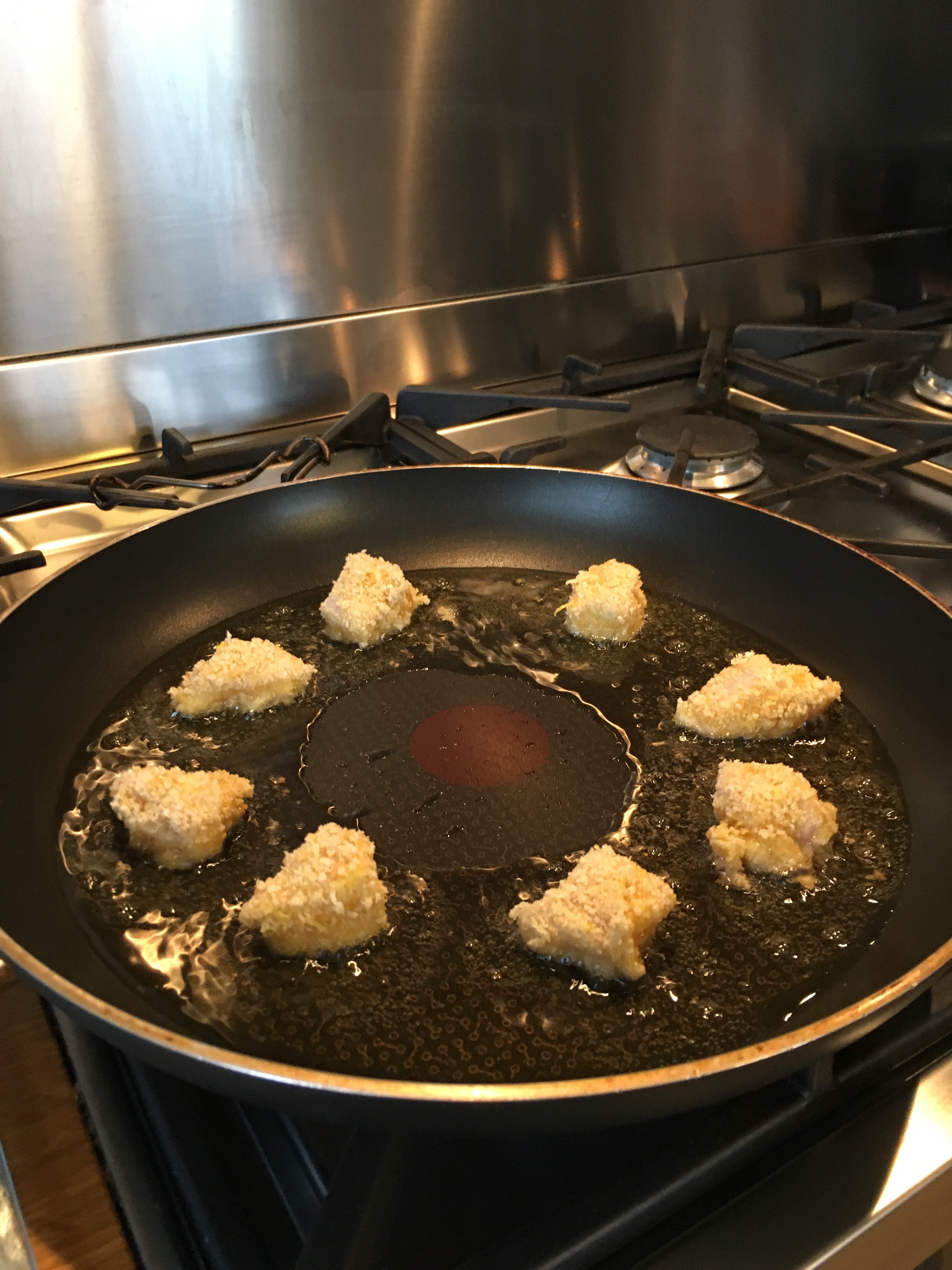 I don’t know why everyone seems to do this but the Christmas deadline really makes you want to clear out any old jobs that have been sitting around for a while. One of which was sorting through Ariella’s outgrown clothes. This is something that I used to have to do a lot more frequently than I do now, when she was outgrowing clothes sizes from Newborn/One Month, 1 – 3 months, 3 – 6 months, 9 – 12 months, 12 – 18 months then 18 – 24 months. The first few months it felt like she had just arrived and we were already shipping out her clothes from the drawers. I remember fondly keeping back  few outfits that had sentimental value to us and selling the rest for another parent to enjoy on Ebay. You really don’t get much for the clothes, even the designer clothes online but It felt reasonable to give those clothes a use. 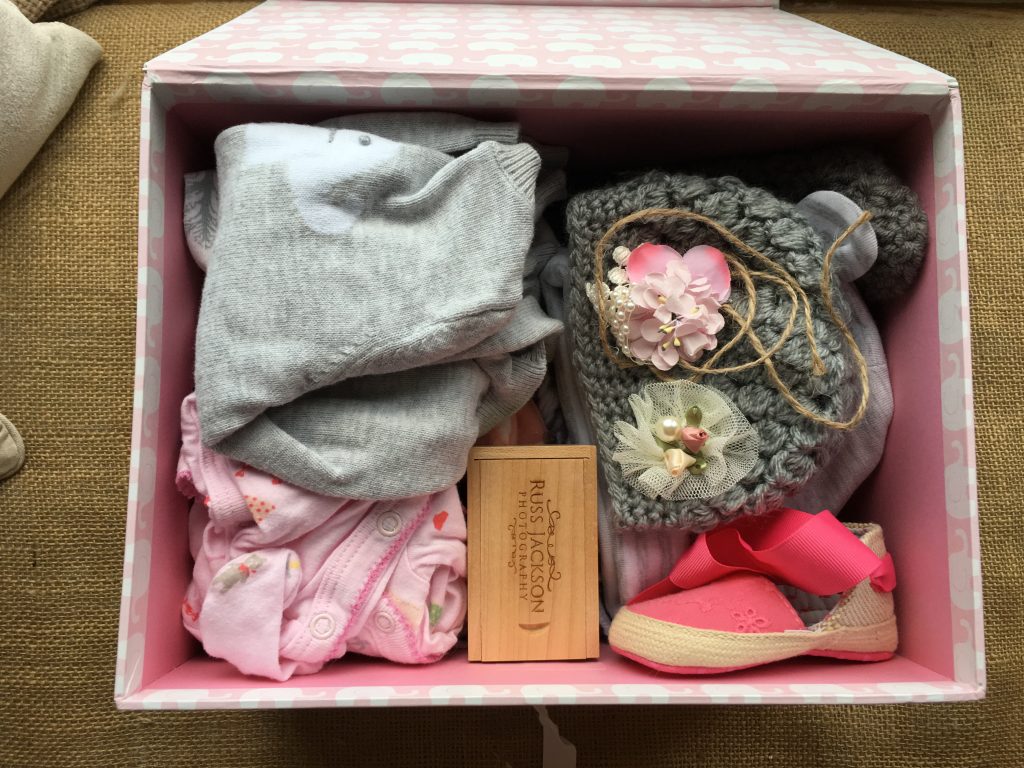 I had stored up things from over a year ago, Christmas 2015! Probably 9 – 12 months onwards. We are now in the 2 – 3 year range, although some things from 18 – 24 fit fine still but I won’t buy anything in that current range now. We are keeping all of this though, I feel that any other siblings should have their own newborn clothes so that they too can have a special box of memories of things I identify as “theirs”. Ariella’s drawers now look as they did long before her arrival, neat, tidy, organised. This pleases me, I do love an organised home as I feel it gives me the ability to hold an organised mind. I must try harder to keep this so! 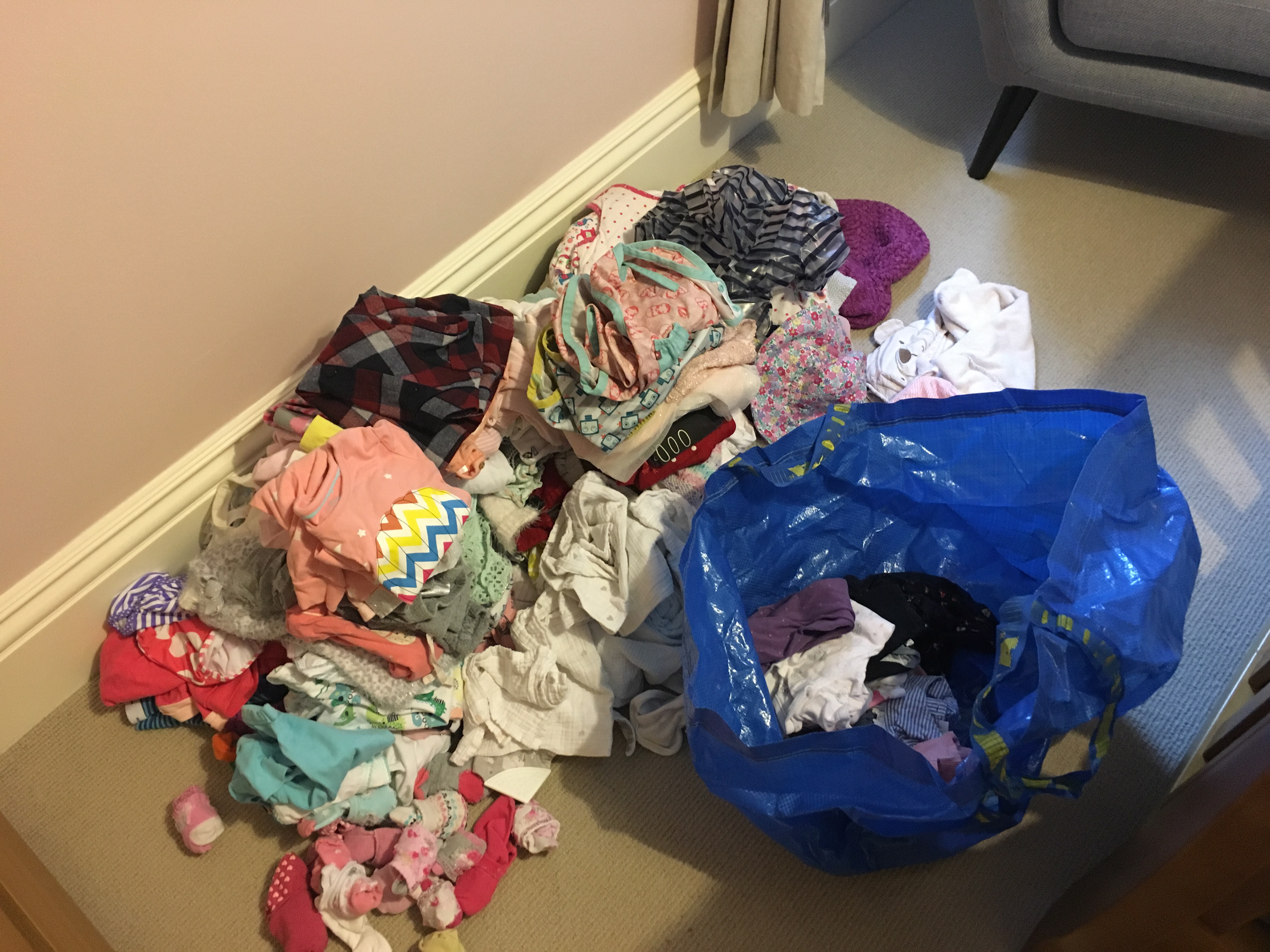 On Tuesday we needed to play Postman, I had a few parcels to send and thankfully everything arrived in time to do so. I think I may have mentioned in a previous post that this year two of my deliveries (although it’s now looking like three) have gone missing? The rest of the year I can’t even think of one time that my parcel has wandered off. Picture me with a huge parcel in my hands, two parcels in a big side hold shopping bag and Ariella strapped to my front in the Tula as I walk down to the post office. If someone had been around to take my picture I would have asked them to! It was all in the careful knowledge that my efforts would be rewarded with a foot long sandwich from Subway after.

Tuesday afternoon there was a chill in the air, but we decided to catch up with one of my friends and her son at the park and to check out how the birds were getting on. 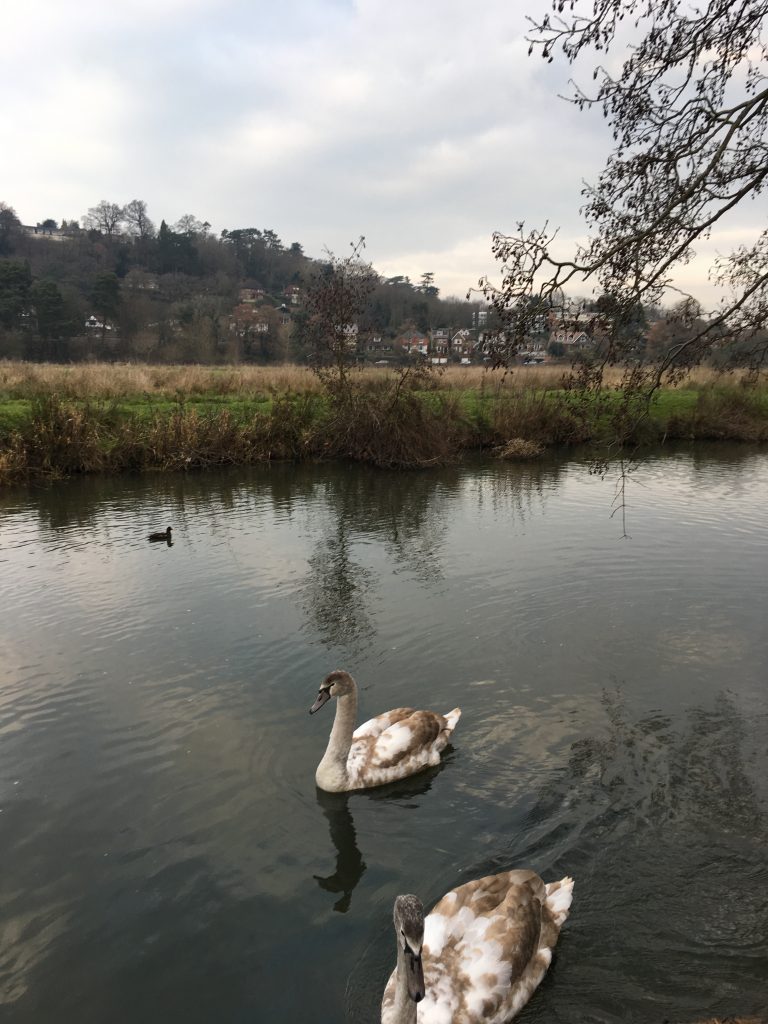 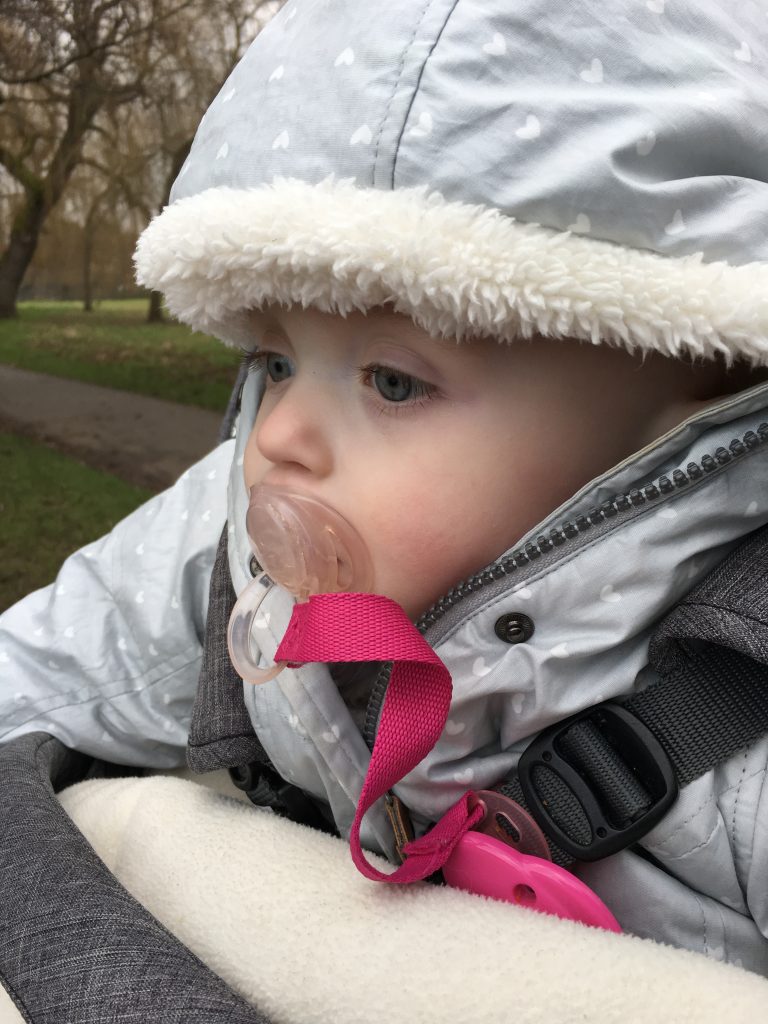 I forgot to say another job on the list of tasks was building the IKEA kitchen that is our gift to Ariella for Christmas. I wanted it pre built as there was little point in wrapping it, so for now it’s hidden in the Study, I’m so pleased with it. It took some time to build even with the two of us doing it, but it’s a great height for Ariella and I’m sure she will enjoy it for years to come. If you are still looking for ideas for your toddler at Christmas please check out The ultimate Montessori gift guide on Fridabemighty.

Wednesday I thought we had Hydrotherapy in the madness of all the letter’s I receive I had just auto pilot entered a lump of dates into my calendar on my phone. We didn’t have it, which I realised when we got there and were told it wasn’t on today. But never mind, the trip out settled Ariella and when we got home she had a major nap. She had been really unhappy all day, it was only during the evening that I noticed she has some more teeth coming. Finally the gaps between the front and back teeth are starting to fill out, but it explained why she was grumpy and why she had started to expect her milk and bottle again.

We don’t have any of the bottles in the kitchen anymore, so we haven’t given in at all with this. I’m sure once those teeth are through she will be back to her normal self. In the afternoon we baked some mince pies! I didn’t make my own pastry, I could say this was because it’s quicker and yes it definitely is in my view. But it’s mostly because every time I make my own pastry it looks like some of rerun of the days where I used to make play doh food (or my mum’s home-made version of it). I loved doing this with Ariella, it really did make us feel very festive and set the mood for the rest of the holidays. Little hands can really help with cookie cutters, when she got bored she could go off while I finished up. One thing she made sure of was that she got a taste straight after they came out the oven! 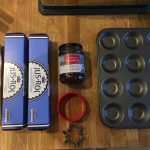 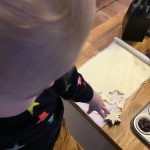 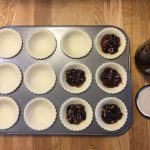 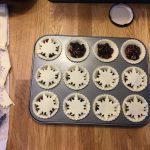 Today we had Physiotherapy as expected! It went really well, Ariella is making progress and progress is always good! We have a few things to concentrate on, lots of work with standing and sitting. At the moment Ariella isn’t able to reliably get back down from standing, so we will work on getting in and out of this position with her and hopefully by our next appointment things will have progressed again. Our physiotherapist is going to be running a few of the Hydrotherapy session so it will be good fun to see her more regularly!

Tomorrow I have not one single thing in the calendar booked in. Blissful!