22 Months Old – All wrapped up

In two months time I can stop counting in months, when someone asks me how old Ariella is I can just say. Two, she is two. That should be a lot easier to remember! This week Ariella turned twenty-two months old but that’s not the only thing that occurred this week. We had a handful of firsts, the first time Ariella has stacked a block of cubes and the first time Ariella has ever used her potty. Every week we see progress but some weeks are more remarkable than others, I think this is a remarkable week. Not only have we seen obvious big milestones but we’ve seen these leaps in fine motor and problem solving/understanding cascade over a multitude of different activities.

In preparation for her two-year review I wanted to introduce Ariella to lacing beads, these are particularly tricky for children with hypermobility. I started by asking Ariella to hold the bead while I thread the lace through and then I took over holding the bead while I asked her to pull the lace the other side. I picked the Melissa and Doug lacing bead set as it had numbers and I try to incorporate numbers in to any activity I can with Ariella, numbers seem to be her key enjoyment and engagement is really key. 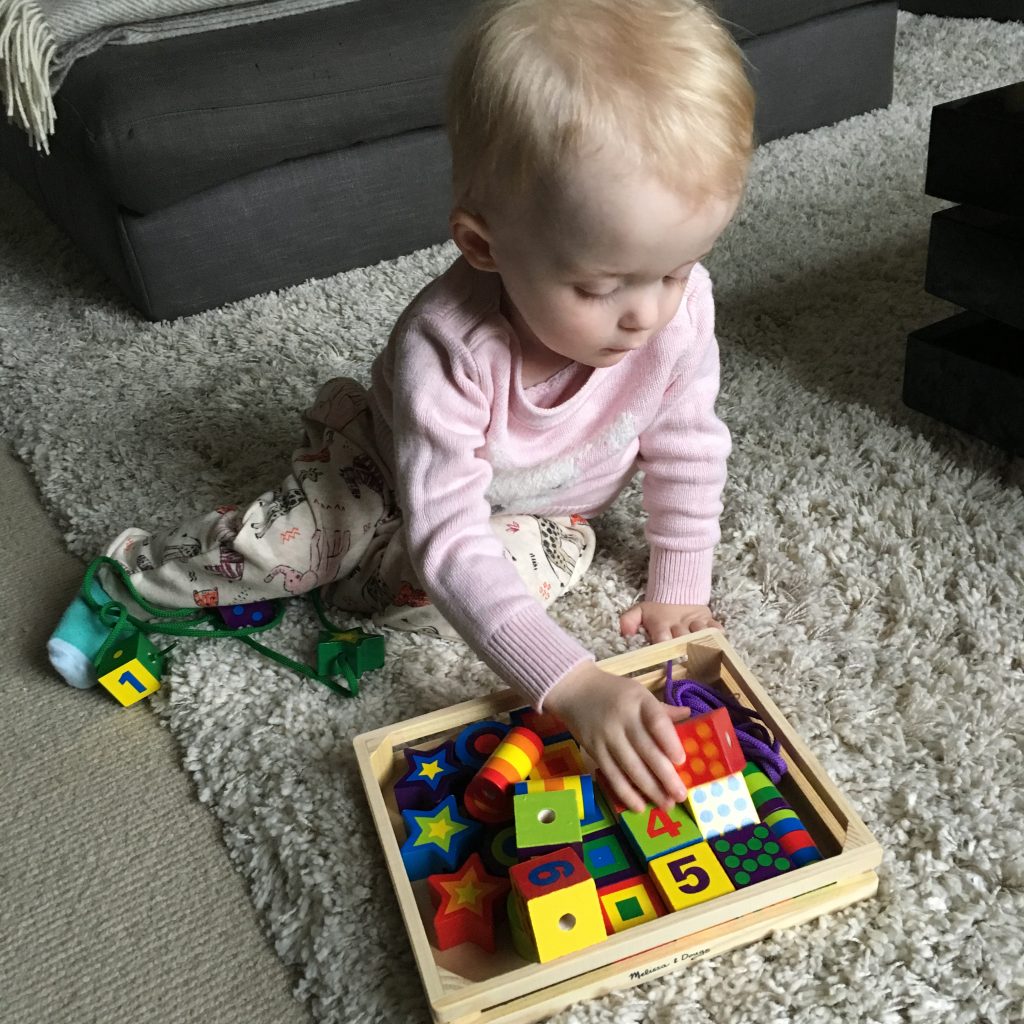 On Monday had a completely free day, so I took Ariella shopping for some more swimwear it was cold but we ventured out wrapped up warm. In the afternoon we went to a new park with two of Ariella’s little friends. All the toddlers were wrapped up warm but in the end I think the chill won and we all headed home, it’s been pretty cold here in Surrey I should have known that this was the start of the dip in temperature again, which could only bring with it snow. 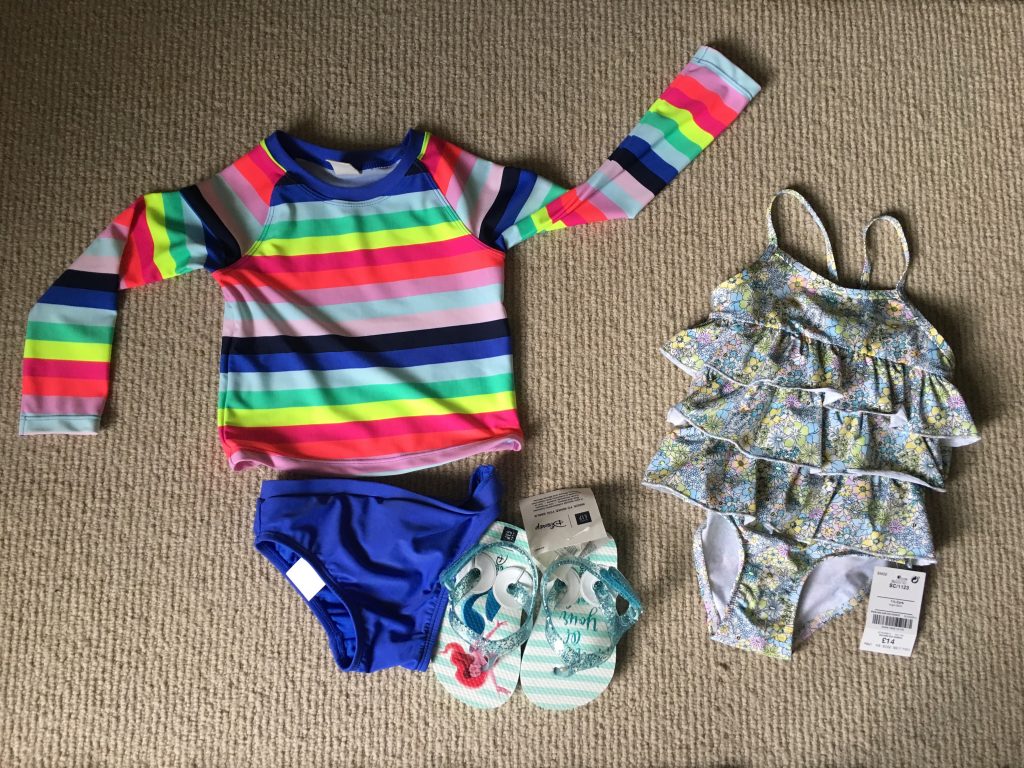 A mixture from Gap and Next 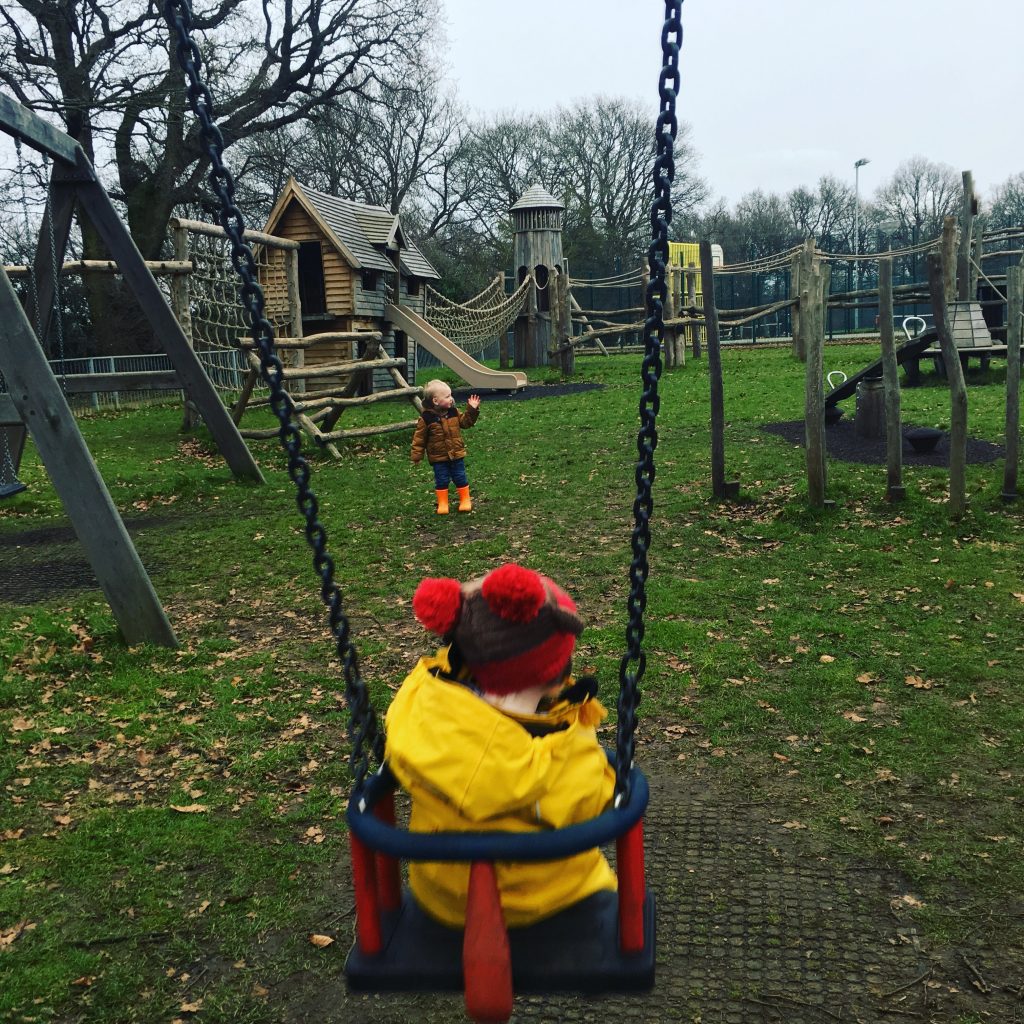 Fun at the park with friends

Tuesday we had another music class in the morning, Ariella’s new-found love for her music class is so relieving. Her little monkey has proved it’s worth, she takes him with her every week and holds on to him throughout. She is also getting much better with passing the instruments back to the class teacher, now that she gets the monkey in return. I’m so glad we didn’t give up on the classes as we really nearly did, she enjoys it a lot and it’s helped hugely with fine motor. In the afternoon caught up again with one of Ariella’s friends at a local soft play centre, she amazed me further by showing some confidence with playing outside the “baby” area which she is too old for now. She enjoyed being in a bigger pit of balls than normal and we spent lots of time walking holding hands around where previously she would be quite anxious and want to be held

Ariella had some repeated blood tests to contend with on Wednesday, the day itself was pretty rammed with activities. We had an early Brunch due to the schedule of the day in a local Sainsbury’s cafe then went to Hydrotherapy over lunch time, straight after swimming I put on some magic cream ready for her blood test. She did so well I don’t know if it was because she was strapped in to the car seat or because this time around I didn’t try to use clingfilm (the nurse suggested it!) instead opting for the patches that the pharmacy could easily have provided. We drove to the Hospital, parked up and alas Ariella was fast asleep in the back – it was bound to happen as Hydrotherapy wipes her out and it was way past her nap time. Begrudgingly I scooped her up into her Stroller and headed off to the children’s department hoping she might fall asleep again as we were early.

Sitting outside the room waiting for our turn all you could hear were the cries of the children before you. I’m so proud to say that Ariella when having her blood taken she didn’t cry, she didn’t move, she looked directly at the needle which is more than I can ever do on myself. Both of the staff looked completely shocked, so was I – last time we took Ariella she cried and struggled so this was very unexpected. They put a nice little cartoon plaster on and attached a bag to catch a urine sample. I’m expecting her results to come back okay, they are just checking to make sure that the last abnormality was due to just a virus at the time. 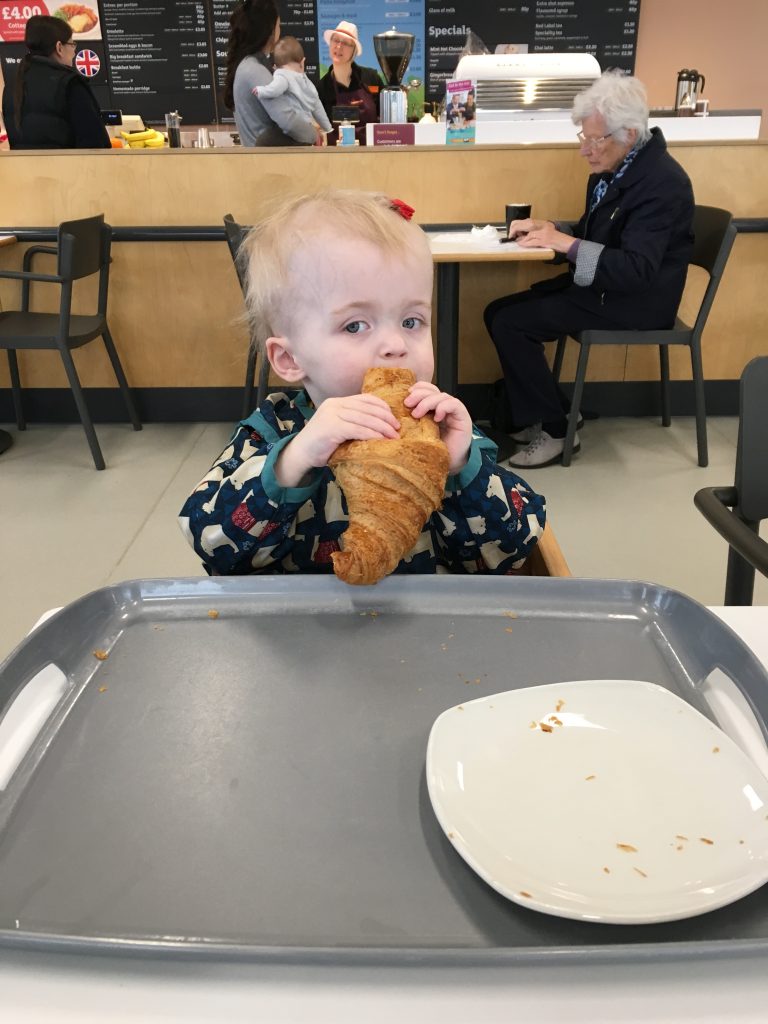 Needless to say Ariella did not wee in the bag while we were in the Hospital, we were sent home with some spare bags and a tube just like last time. All in this is the reason that my Thursday morning started with me holding a bag of wee in one hand while trying to funnel it into a tube in the other at 7am.

Friday morning Ariella had a physiotherapy session which went well, as normal Ariella showed signs of progression and we’ve been given a body wrap to wear around her tummy to help her with her core. She doesn’t need to wear it all the time as it’s important that she get time without it to strengthen fully but we intend to do more walking practice with her wearing it as it should help. In the afternoon daddy came home earlier and this is when the magical block building occurred, I can’t tell you how many times we’ve gone over stacking blocks. Often she would try one and find it difficult to manipulate the blocks enough to get it to sit in a stable way. During the last week since the big emotional leap she had, learning of “self” her interest in objects has really come on too. I think given how she has been spinning cups and tipping bags of toddler crisps out on the floor I should have known she might have been showing a big change in fine motor abilities.

This evening Ariella announced for the first time that she needed to do a “poo”! It was the quietest announcement she has ever made but Daddy heard it and we leapt into action, grabbing the potty and sitting her on it. I can’t say I was really looking forward to potty training, much like weaning it’s just another thing to clean. Part of the reason why I never prevailed with teaching the cats to use the bathroom instead of their litter box too, it’s all a lot of mess.

Here we are at the weekend, I wonder what tomorrow has in store for us – so far it’s impromptu potty training!

“The moment you doubt whether you can fly, you cease forever to be able to do it.”
–  Peter Pan, J.M. Barrie 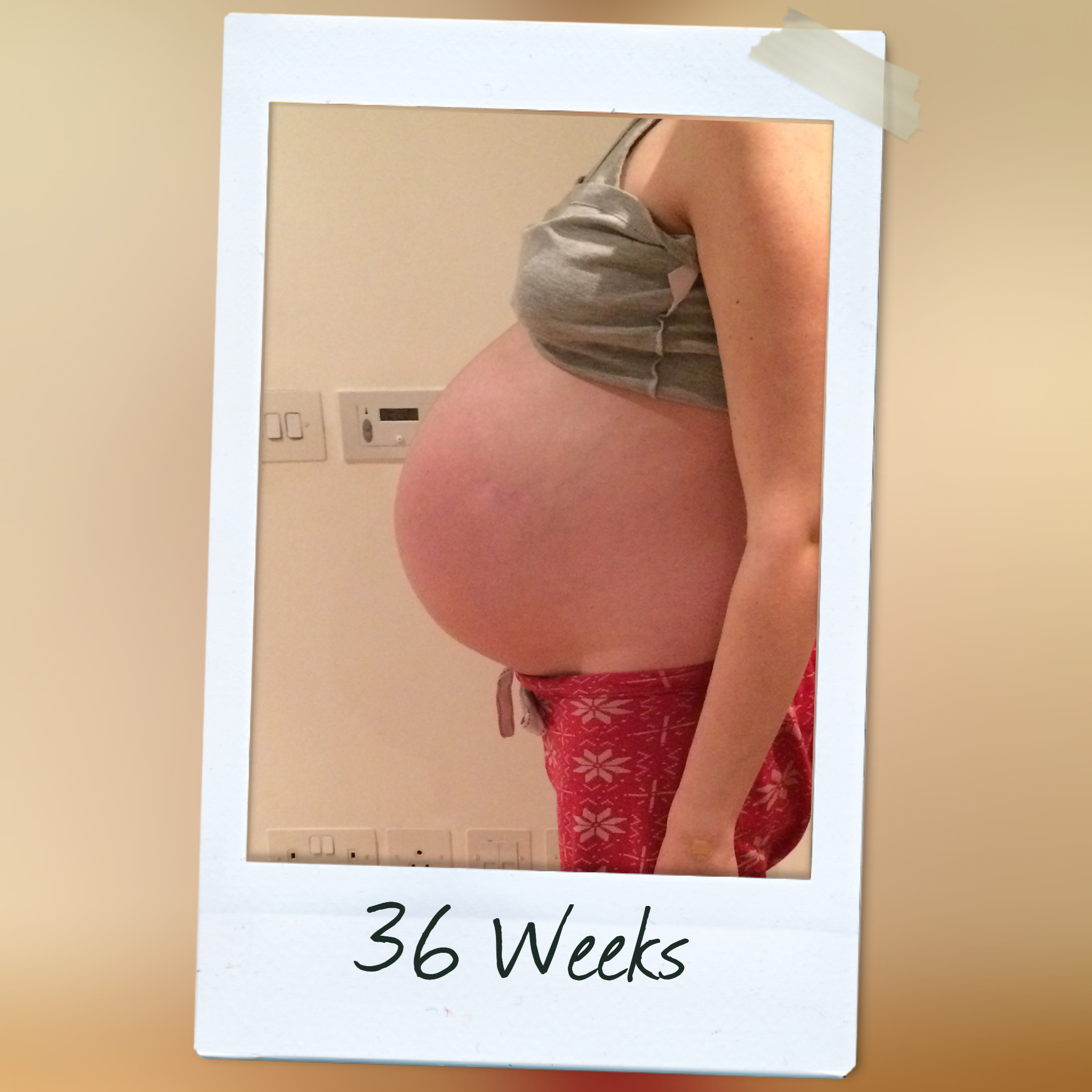 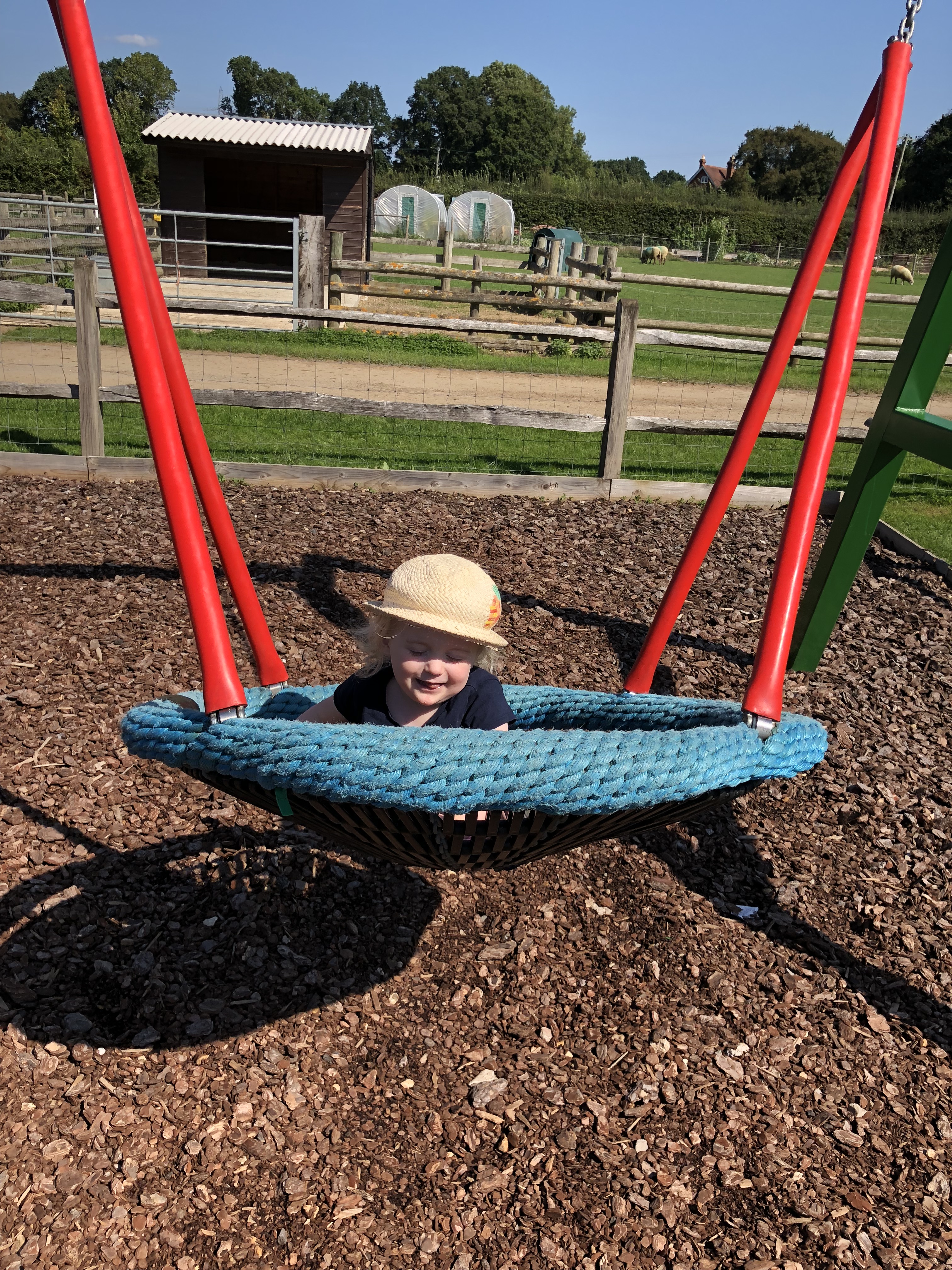